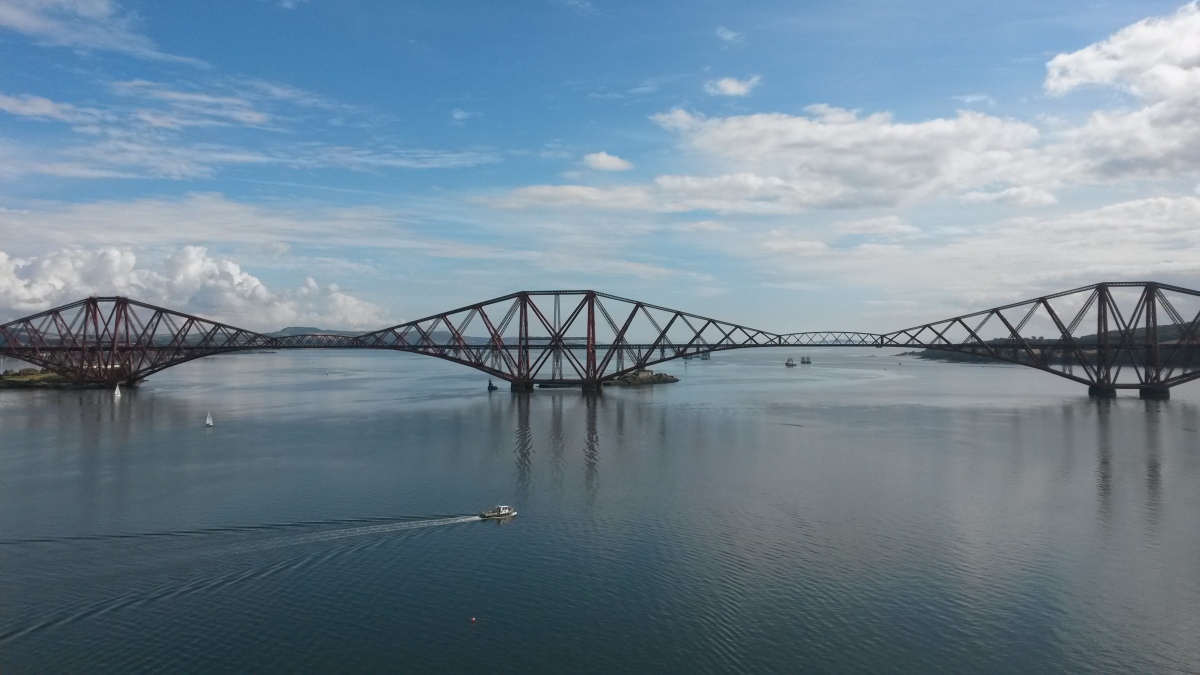 Route Out – Gorebridge to Mayfield to Carberry to Whitecraig to Newcraighall to Bruntstane to Holyrood Park to Edinburgh City Centre to Haymarket to Silverknowes to Dalmeny to South Queensferry to The Forth Road Bridge. For route map click here.

Route Back – The Forth Road Bridge to South Queensferry to Dalmeny Estate to Silverknowes to Leith to Portobello to Musselburgh to Inversesk to Whitecraig to Dalkeith to Newbattle to Newtongrange to Gorebridge. Google Maps decide to be annoying so this route had to be split over 2 maps: click here for map 1 and here for map 2.

I had been thinking about trying to cycle to the Forth Road Bridge for ages but had thought it would be far too difficult and would be impossible to avoid all the busy roads. But then I discovered that National Cycle Route no.1 went the whole way there and almost all of the route through the city of Edinburgh is off road on cycle paths. So, early on saturday morning Dad and I set off for the bridge…

We left Gorebridge along the B6372 but for a change, took the first left turning onto the quiet road that takes you high up a hill and back down the other side to Mayfield. Along this road we got some lovely views over the Midlothian countryside and one of the best views of the Pentland Hills you will ever see (so Dad said). We then cycled through the outskirts of Mayfield and then back into the countryside up another steep hill on a single track road to d’Arcy. From here we went fast downhill for about half a mile until the the turn off for the bumpy road to Fordel Mains. We stopped in our usual scenic spot for a quick drink and a photo with Edinburgh in the distance. After that was a really fun, fast section, mostly downhill for about 3 miles. We zoomed past Carberry at over 30 mph and reached the village of Whitecraig in no time at all and it was here that we joined National Cycle Route no.1.

From there onwards we basically followed the blue cycle route signs all the way to the Forth Bridge. Most of the route is on really smooth cycle paths (that used to be railway lines Dad told me) and it is so well signposted, it would be impossible to get lost… After a short section along the river Esk, then skirting round the edge of Mussleburgh Golf Course and Queen Margaret University, we got to the Newcraighall area of Edinburgh. Here there’s a short section on the road but soon we were back on the path again leading to Bruntstane Train Station, where Dad had to push his bike up and over the railway bridge to reach the other side of the track. I managed to cycle up the steps and over the bridge on my mountain bike though!

After that it was easy going and we soon reached the Innocent Railway path that took us along the side of Holyrood Park and the mountain Arthur’s Seat and then out of a really long tunnel into some quiet residential streets in St Leonards. Next the route took us through The Meadows park. Here I spotted a bike counter that told us we were the 864th and 865th cyclists to go past today. After The Meadows, you have no choice but to cycle on the busy main road for about a mile along George IV Bridge and the down The Mound. There’s a cycle lane at the side of the road so it’s not too dangerous but you still have to be very careful. After crossing the tram tracks on Princes Street, we diverted slightly off Route 1, heading along the pedestrianised and 1-way Rose Street so that we could stop at Greggs and grab a sausage roll. We rejoined the route at Charlotte Square and soon we were cycling along the relatively quiet residential streets of the West End heading for Haymarket. After carefully crossing over the main road (and some more tram tracks), we went around the back of the train station, saw a tram and lots of trains and went back onto the cycle path once more. This path took us quickly from Roseburn to Silverknowes, at one point passing through a massive crossroads where about 6 different cycle paths all join up (there are loads of really good signpost at that junction…). From Silverknowes, the route takes you along some very quiet roads through some posh parts of Edinburgh where there are massive houses, before taking you over the Cramond Brig Toll to the other side of the River Almond.

The next section of cycle path follows the main road (but is separate from the road) so it’s noisy and not too pleasant until the turn off for Dalmeny. Along this quiet road, just before the village, we got an amazing view over to the 3 Forth Bridges and soon enough, we’d gone through South Queensferry and were actually cycling on The Forth Road Bridge itself. I really liked cycling on the bridge and we got amazing views of the Forth Railway Bridge and saw loads of trains. When we stopped to take photos, we could feel the road bouncing under out feet because of all the traffic speeding past. The first half of the bridge is fairly uphill but once you reach the top it’s really fast all the way to the end (and Fife). Just make sure that, unlike us, you don’t go over the 15 mph speed limit… When we reached Fife we turned around and headed back to South Queensferry, where we ate an early lunch of cheese sandwiches at the waterfront, survived a wasp attack and then began our long journey home.

Leaving South Queensferry, we took Cycle Route no.76 through the Dalmeny Estate. This is a much bumpier path so not really suitable for road bikes but it’s very scenic. At first it follows the coast and you get great views of the bridges. There’s also several places where you can stop and go to the beach, one of which gives you an unusual view of Edinburgh and Arthur’s Seat in the distance. This beach also had an incredible amount of shells on it… The route then heads away from the sea and goes past Dalmeny House (which is probably the biggest house in the world!) before you head back through the countryside until you reach the Cramond Brig and Route no.1 once more.

We followed Route no.1 again until the massive cycle route interchange I mentioned earlier. At this point we chose the path (no.11) signposted for Leith and after a few miles of easy cycling we reached the Water of Leith, which is not a particularly nice looking river I thought. We then cycled through some quiet back streets and along the side of Leith Links and joined Route no.10. This route took us off road again for a few miles to Portobello Beach. The signposted route takes you right along the promenade and this should have been a lovely ride but today it was absolutely mobbed. There were musicians and bands playing every few yards and crowds of people kept getting in the way and making it unsafe and almost impossible to cycle. Luckily one of the bands we saw were quite good (they had about 20 guitarists and were playing The Beatles) so we watched them for a bit before taking a detour away from the beach and back onto the main road. If we’d managed to make it to the end of the promenade we would have joined onto this road anyway so it was fine. After about a mile or so, we made it to Musselburgh where we cycled past the harbour and along a much quieter promenade before heading for the town centre, where we stopped at Luca’s for an ice cream. We left Mussleburgh on the Inveresk road and it was here that Dad spotted his brother and family walking along the street. We stopped to chat to Uncle Andrew, Auntie Jill and my cousins Ella and Angus for a minute but unfortunately forgot to make them pose for a photo… This road took us back to Whitecraig once again and here we rejojned another part of Route no.1, heading along the cycle path to Dalkeith. This path goes through the woods in Newbattle and this is some of my favourite foraging country: there’s so many raspberries here! There’s even a lot of yellow raspberries here and nobody else seems to bother eating them – that suits me fine as they are the tastiest ones ever.

After a quick photo at Newbattle Abbey, we cycled uphill to Newtongrange where we stopped in the lovely park for our final rest of the day. There’s loads of really quiet back streets in Newtongrange that all look identical and can all end up taking you basically the right way, so you can choose your own route here. We decided to go past Square (not The Square or Charlotte Square or anything like that, just Square) because it’s one of the nicest parts of the village. After that, it was only about 1 mile further, all uphill to Gorebridge and home just in time for tea of scampi and roast potatoes. It was the furthest I’d ever cycled in a day but most of the route was quite flat so it wasn’t all that tiring. Even if 62 miles is too far for you, I would really recommend the many amazing cycle paths in Edinburgh. They can take you all over the city without having to worry about traffic and you hardly even realise that you are in the middle of a busy city at all. The paths are nicely surfaced, really well signposted and a real pleasure to cycle on so I’ll definitely be going back there. 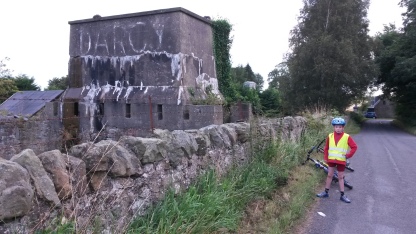 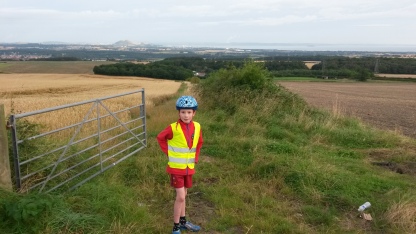 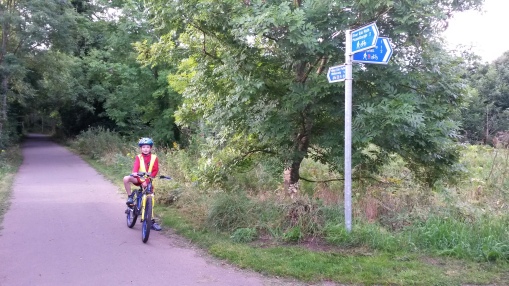 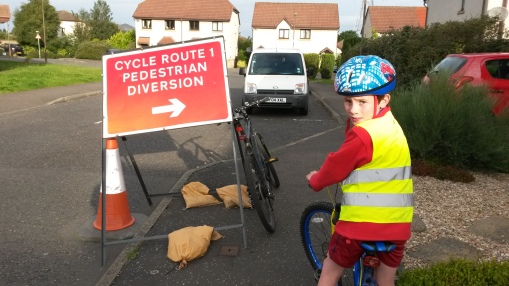 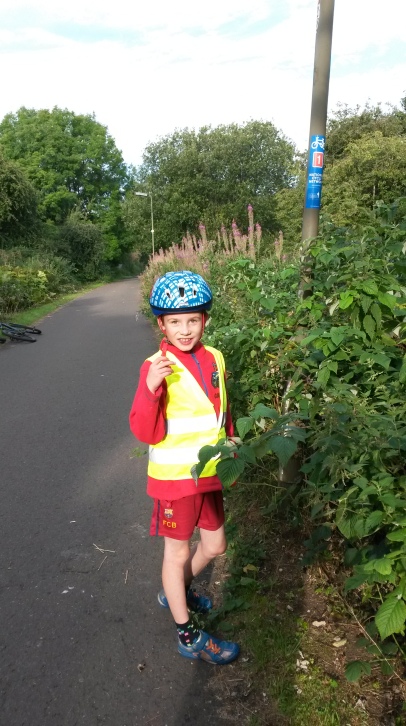 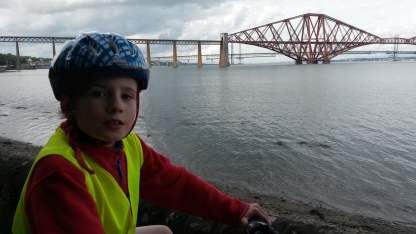 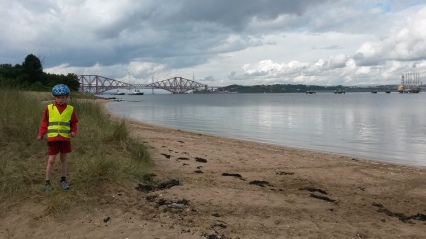 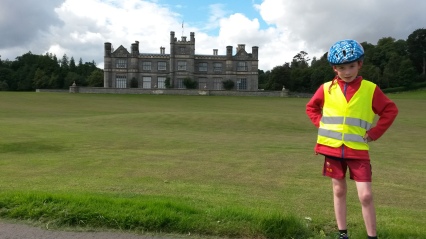 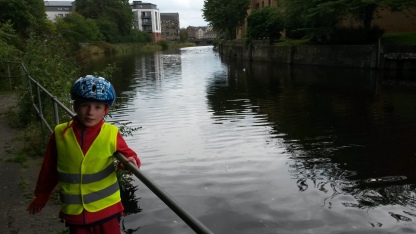 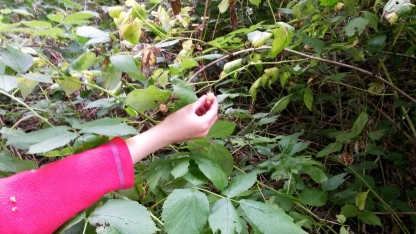 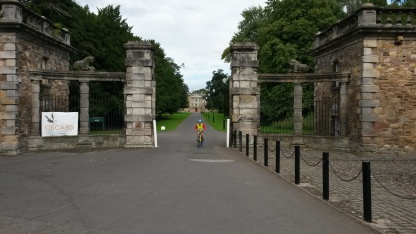