Route Out – Coldstream to Cornhill on Tweed to Town Yetholm to Kirknewton to Wooler to Harthope Valley. For route map click here.

Route Back – Harthope Valley to Chatton to Belford to Lowick to Ford to Crookham to Braxton to Cornhill on Tweed to Coldstream. For route map click here.

It’s a long time since I’ve posted anything on here but don’t worry, I haven’t thrown away my bike and started playing computer games day and night… In fact, I’ve been cycling more than ever and I’ve really just not had enough time to write about any of the brilliant routes that Dad and I have been riding recently. But it’s the school holidays just now and today is very windy so there’s no hope of a bike ride, so I’ve decided to rewind to a sunny day exactly 1 year ago to tell you about a really nice route we cycled on in North-East England.

It’s less than an hour’s drive from our house to the town of Coldstream which is basically the last place in Scotland before you head across the border into England. So we started the route here and immediately crossed over the River Tweed via a magnificent old bridge and entered the Northumberland region of North-East England. After a short time on the reasonably flat and smooth A697 road, we came to a village called Cornhill on Tweed where we turned right onto a minor road that took us mainly south and slightly uphill through some lovely, peaceful countryside with views of the Cheviot Hills in the distance. After a very long straight section of road, we came to a cross roads and went straight over onto the B6352 which took us over the border and back into Scotland again. This is a very nice part of the country and to be honest, you can’t tell whether you are in Scotland or England around here – it all just looks the same.

The road more or less follows the Bowmont Water for quite a few miles until reaching unusually named Town Yetholm. After crossing a bridge over the river on the left, we soon came to the similarly named Kirk Yetholm as the road headed north-east again, following the river but on the other side this time, and skirting right round the edge of the Cheviot Hills. This is a really nice, quiet road with fantastic views of the hills and the river valley. It has some ups and downs but nothing too hard at all. Soon, we crossed the border back into England and a sign told us that we had entered the Northumberland National Park. The road keeps going around the edge of the hills in almost a semi circle for quite a long time and Dad and I agreed that this was one of the most scenic and enjoyable stretches of road we’ve cycled on. Eventually, we arrived at a junction with the A697 road again and turned right heading for Wooler. We could have taken the main road all the way from Coldstream and saved ourselves 10 miles or so but I think it’s fair to say that taking the long cut on the quiet, picturesque back roads was a good idea.

Wooler is supposed to be a nice old market town but there was some sort of gala day taking place so we couldn’t cycle through the town centre when we were there. Instead we diverted around the outskirts on the main road and then followed a sign on the right which pointed to cycle route no.68 (also known as the Pennine Cycleway) and the Harthope Valley, which is where we were heading next. This part of Cycle Route 68 is really hilly with lots of short but steep ups and downs so it’s hard going but the views are good at least. Soon enough we came to Middleton Hall where we turned right onto a very narrow, straight road which looked as though it was climbing vertically up to the sky – it looked that steep! The sign warned of a 1:5 gradient and it definitely felt like it. As the road headed up into the trees, it was hard to even keep our front wheels on the ground and we both ended up zig-zagging across the road to help us keep going. Thankfully, it wasn’t a long climb and after a short section of flat, we crossed a cattle grid and finally we got our first view of the Harthope Valley. This must be one of the most scenic valleys in England and I would definitely go back there to have a walk in the hills one day. We sped down a very steep slope into the valley and cycled along the narrow road, following

the river further and further into the hills. It was all slightly uphill and into a very strong wind so the going was very slow. It was also surprisingly busy with cars full of people heading out to enjoy the beautiful countryside and although the views were stunning, I was glad to finally reach the end of the road at a farm. From there we turned around and sped back down the hill, wind-assisted, in half the time it had taken to cycle up the valley. That really was great fun! We then had to cycle up the short but stupidly steep hill to leave the valley behind, before heading down the scary 1:5 gradient road back to Middleton Hall as safely as we could.

We then turned right onto route 68 once more for a short while, cycling through deserted rolling countryside. After a few miles we turned left and arrived at the A697 yet again where we turned right and cycled south-east for less than a mile before taking the next left turn onto the back roads again. We were now heading generally north-east again, though miles and miles of almost traffic free roads through fields on barley and wheat on mostly quite flat gradients. This was a really pleasant area to cycle in. Eventually, a couple of miles north of the village of Chatton, we turned right onto the B6349 and started heading uphill once more. This was a long gradual climb that seemed to go on forever. Thankfully the views behind and to the left were incredible, and you could see practically the whole of Northumberland. The Cheviot Hills looked amazing from here.

From the top of the hill, we sped down to the town of Belford where we stopped at a shop to buy more water to keep us going for the journey back. Then we turned left, up another short but steep climb until we could see some nice views of the Northumberland coast a few miles away on our right. We could even see Holy Island and Bamburgh Castle away in the distance. Just before reaching the extremely busy A1 road, we turned left onto a more suitable minor road which more or less stayed parallel to the A1 for a while before heading west at Fenwick. From this point on the ride became a bit of a struggle. It had clouded over by now and the wind was really strong and blowing straight into our faces, making progress very slow as we cycled along the B6353 in more or less the same direction and slightly uphill for what seemed like forever. Thankfully, we eventually arrived in the historic village of Ford and the road suddenly became very fast and steeply downhill for a bit, passing a castle along the way, before we turning left across a bridge over the River Till and then quickly right again to head for Crookham.

After Crookham, we took a very quiet and narrow back road to a place called Branxton which was signposted as being the site of the Flodden Field battle which took place between English and Scottish armies in 1513. Despite the signage, we didn’t really notice the battle site – it must just be a random field now and soon enough we were back onto the A697 once again for an easy few miles back to Scotland where we rounded off the day with a fish cake supper for tea.

It had been a long but really enjoyable day out, despite the wind making things difficult for long periods. Northumberland is a beautiful part of the country, perfect for cycling. I have been back there several times since – hopefully I will find time to tell you about those adventures before too long! 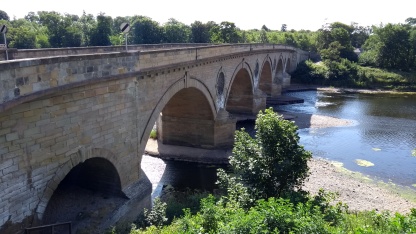 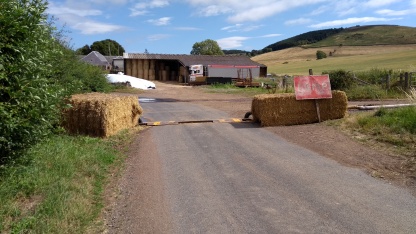 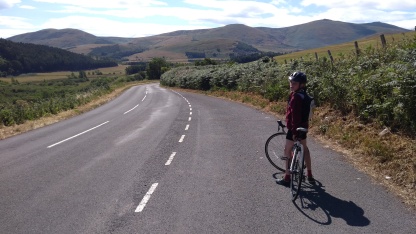 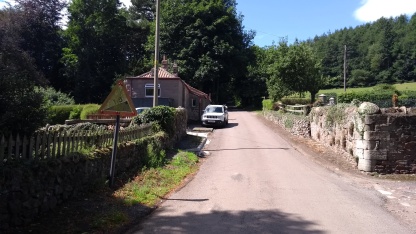 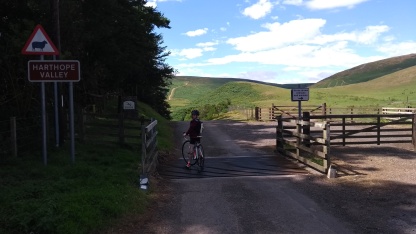 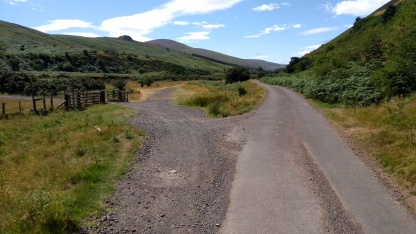 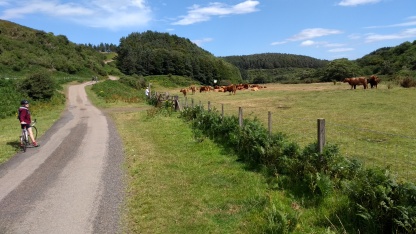 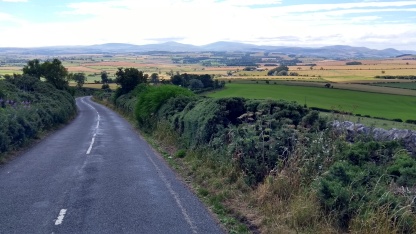 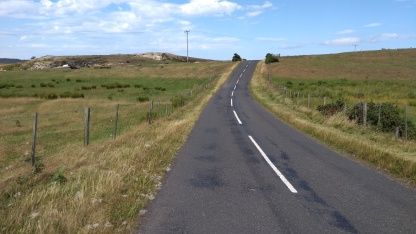