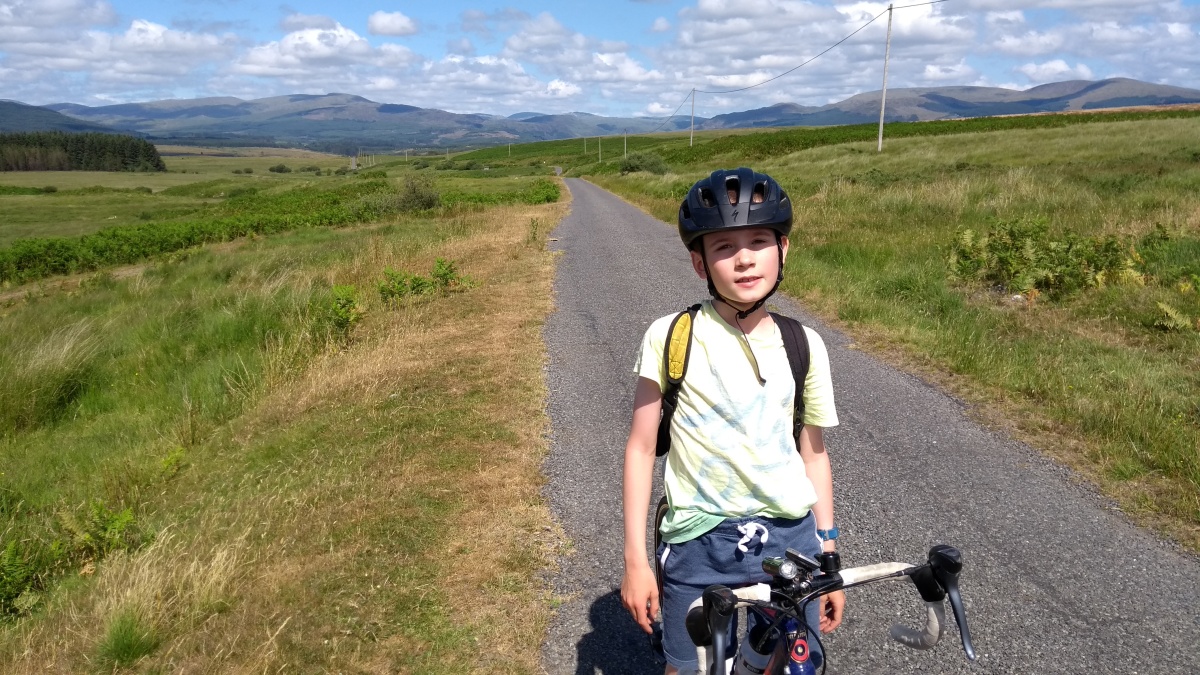 On the second day of our summer holidays Dad and I were up nice and early and after a breakfast of Aldi’s version of Special K (surprisingly tasty and very cheap), we were out on our bikes before 9am. Before going to bed the night before, I had planned a very long route for us which turned out to be rather more hilly than expected. But I really like hills so we had a cracking day out in some of the most beautiful countryside in the south of Scotland.

To start with we took the cycle path alongside the River Cree into Newton Stewart where we saw a heron creeping around in the shallow water looking for its fishy breakfast. Then, after a brief spell on the main street and a quick cycle over the grand-looking bridge across the river, we turned left onto a minor road, following the Cycle Route no.7 sign – we were going to follow route 7 for most of the day. This quiet single track road soon took us out into the countryside, basically following the River Cree northwards, going in and out of the trees for quite a number of miles. This area is called Wood of Cree and looked like a nice place to go for a walk. Although it looked mainly flat, it actually felt very slightly uphill as we cycled along the deserted road. Eventually we came to a junction and turned right and here the landscape changed as we entered the Glen Trool 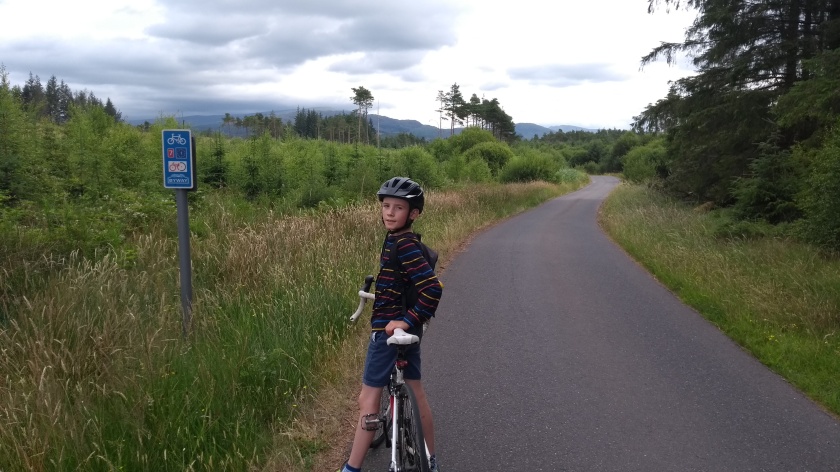 Forest. Here the trees are mainly conifers and there’s lots of evidence of forestry operations (ie. trees being chopped down!) and signs warning to watch out for forestry lorries. It was Sunday though so we didn’t see any lorries at all, or even any cars as we had the lovely smooth, narrow road all to ourselves. Soon we reached Glentrool village but instead of turning left into the village, we went right, heading into some even more remote countryside of the Glen Trool Forest.

From this point on, the road starts to climb more noticably uphill, not enough to have to use any low gears but enough so that your legs really do start to complain – especially as it goes on like this for a long long time (10 miles or so I think). Sometimes the road was lined with spruce trees on both sides but sometimes we had great views over to the Galloway Hills on the right as we cycled along, in and out of the trees. This area has the most wild blueberries I’ve ever seen – and they were very tasty! At some point we passed 2 signs: one was warning that from this point on the road is only gritted during daylight hours; the other was warning that we were about to enter Ayrshire!

The warning signs weren’t necessary though as Ayrshire turned out to be perfectly lovely and at this point the road really did start climbing much more steeply as it wound its way quickly up to the high point of the so called Nick of the Balloch climb at around 400m high. We stopped at the top for a blueberry feast before speeding down the north side of the Balloch as fast as we dared. There are crash barriers on the left side to protect you from a very steep drop if you were to lose control on one of the twisting corners, but thankfully we made it down the steep hill safely enough. We passed a large group of cyclists heading up the other way. It looks like it would be a very impressive, but hard, climb from that side so I think I will go back there another day to give it a go. 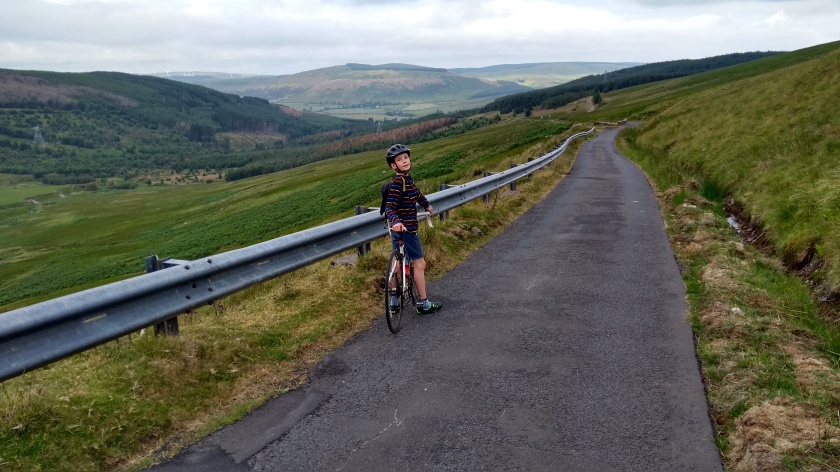 After a very brief flat bit at the bottom of the Balloch, we immediatly began climbing up the next steep hill of the “Ayrshire Alps”. This hill is known as The Pilot for some unknown reason and it was quite a hard slog up to the top of the single track road but we did spot an ancient stone signpost which told us we were 10 miles from a place called Maybole and 24 miles from Newton Stewart. The descent down the other side of the hill gave us a grand view over the Ayrshire countryside and some wind farms in the distance and we enjoyed speeding down the hill into the valley below. Well, at least I enjoyed it – Dad was unfortunate enough to be stung on the elbow by a wasp whilst travelling at over 30 mph! At the bottom of the hill, the sun finally came out and we turned right onto a rather bumpy single track road for a few easy miles past fields of sheep and cows until we arrived at the village of Straiton where we decided to stop for lunch. It was our usual fare: crisps, oatcakes, salad, apples and (for Dad) cheapo Aldi chocolate.

After lunch we cycled through Straiton (which seemed like a nice little place) and then turned right at the sign pointing to Newton Stewart and we began our long journey home. At first the road was quite flat with 2 lanes, though it wasn’t all that busy. The views of the valley and the hills in the distance were quite nice in the sunshine. After a while the road narrowed and began to climb upwards into the hills. It was long but quite a gradual climb which took us back into the Galloway Forest again. At one point we crossed a bridge over the oddly named River Stinchar and then the road began to climb 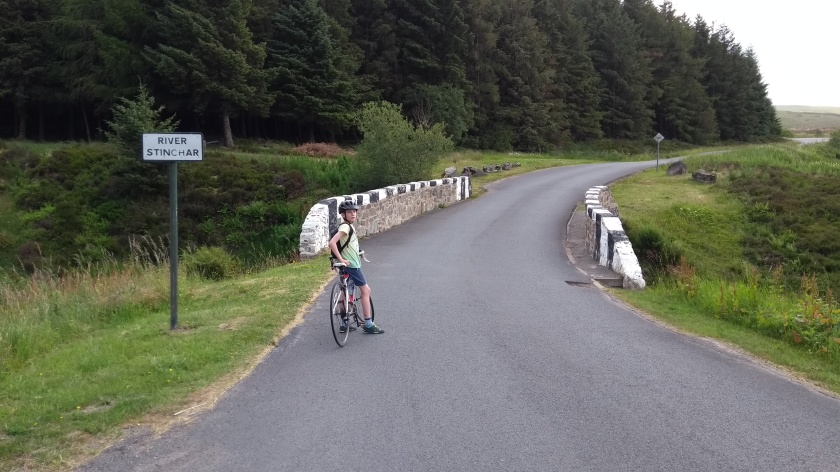 ever more steepy until we finally reached the top – the highest point of the day at well over 400m. From there we had a great view over to the Balloch hill we’d cycled over a couple of hours before, as well as the road ahead, disappearing off down the hill in front of us. It looked like a fun and fast descent – and it was! Soon enough we were back onto the same road we had cycled up this morning. In this direction, heading south towards Glen Trool, it was really great fun. It was nearly all slightly downhill and smooth tarmac with hardly any traffic to be seen as we said goodbye to Ayrshire and sped back into Galloway. The fast fun seemed to go on for endless miles and with the sunshine and blue skies replacing this morning’s grey, low cloud, the views of the hills and the forest were much more impressive.

It wasn’t long before we reached the sign welcoming us back to Glentrool village. But again, we avoided the village and turned left and decided to cycle the 4 miles or so right into the heart of the Glen Trool Forest and the stunning hills surrounding the picturesque Loch Trool. The road was fairly flat apart from a couple of short but very steep climbs right at the end, just before we got the end of the tarmac at the parking area for Bruce’s Stone. Bruce’s Stone is a monument that was errected to commemorate Robert the Bruce’s victory at the Battle of Glen Trool in 1307. The stone is just a big boulder with nothing historic about it so is not really worth looking at, despite all the tourists that flock there to get their picture taken. The views of the hills and the loch are grand though.

We then cycled back along the narrow road and this time turned left and finally did go along the road through Glentrool Village and after a mile of two we came to the junction with the A714 road. It would have been a nice easy 5 or 6 mile ride downhill from here to Newton Stewart. But I was still feeling full of energy so after a brief time on the main road we turned right onto the narrowest, and possibly the nicest, road of the day. As usual it was suspiciously uphill but this was made up for by the increadible views behind us back to the hills of the Galloway Forest where we’d been only half an hour before. The 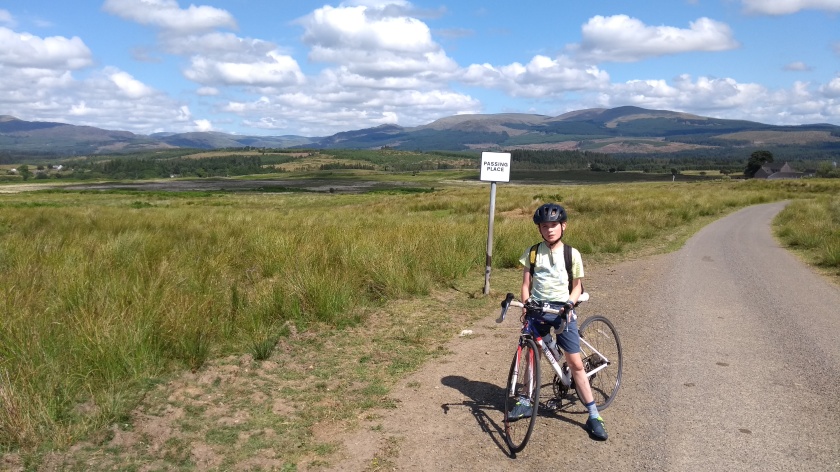 road took us past Loch Ochiltree as we climbed up and around a small grassy hill. From the high point we had a lovely long and straight slightly downhill stretch which took us quickly to the junction with the B7027. Here we turned left onto the smoothest road in the world. It was such a pleasure to cycle on it as it took us through areas of the Galloway Forest that had recently been cut down. It was also mostly downhill and very fast and before long we came to another junction with the A714 once more. We could have been there much quicker if we hadn’t taken our long cut, but we’d have missed out on some of the best views of the day so I was glad we’d gone the long and hilly way. After that we turned right and sped down the hill for a mile or so to Newton Stewart where we stopped at the Co-op to buy ice lollies to try and cool ourselves down! Then it was only a half mile or so back to our accomodation at Nether Barr where we arrived just in time for tea (mushroom risotto) – so that was well timed. It had been a bit of an epic adventure through some beautiful countryside and definitely one of the highlights of our holiday in Dumfries and Galloway. 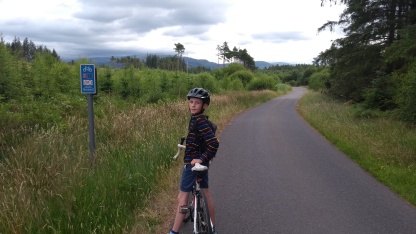 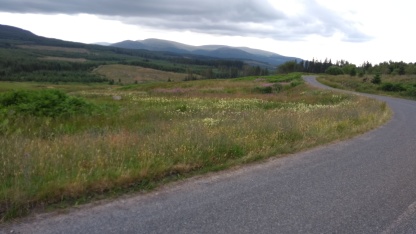 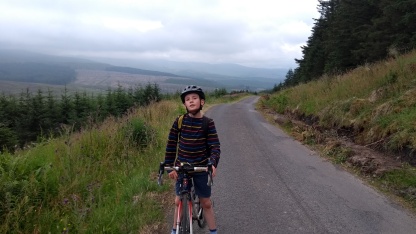 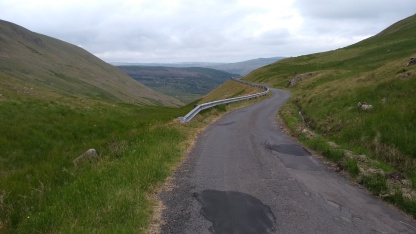 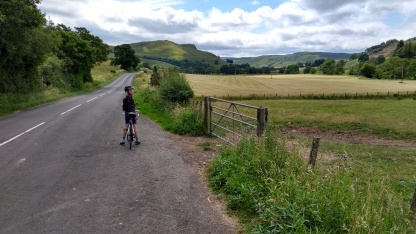 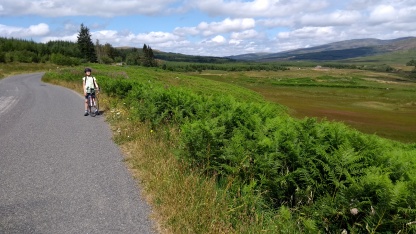 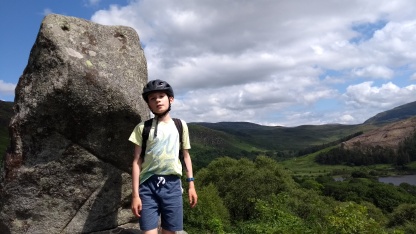 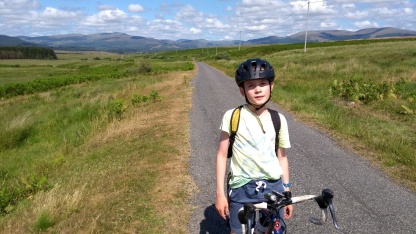 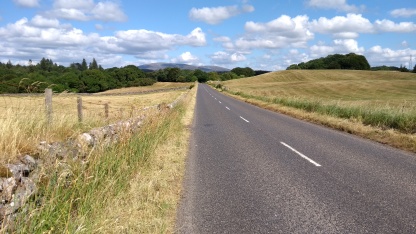