Route out – Gorebridge to Bonnyrigg to Rosewell to Roslin Glen to Penicuik. For route map click here. Google Maps says to go onto the A6094 for a short section before Rosewell but you don’t need to do this – just follow the path of Cycle Route 196 instead.

Route back – Penicuik to Mount Lothian Farm to Edgelaw Reservoir to Carrington to Gore Glen to Gorebridge. For route map click here.

On Sunday morning we got up early and by 7am we were already on our way to Penicuik, which is near the Pentland Hills about 10 miles from our house. I had been thinking of cycling there for a while and there are lots of different ways to get there. Today, we decided to go there along the Dalkeith to Penicuik Walkway which follows the route of the old railway line.

To save time, we headed straight out of Gorebridge along the main B704 road. At this time of the day on a Sunday traffic is really quiet, but I wouldn’t recommend cycling on it normally. This road heads steeply downhill and me and Dad both reached 30mph before we reached the traffic lights at the crossroads with the A7. We went straight through the lights and headed downhill again passed Dalhousie Castle where we stopped for a quick photo. Soon we reached the town of Bonnyrigg which is about 3 miles from Gorebridge and just before the town centre, we turned left onto Cycle Route no.196 which follows the Dalkeith to Penicuik Walkway. Straight away we saw evidence of the old railway with the disused Bonnyrigg station platform. At this point the cycle path is a nice smooth surface and quite flat. The only real hazard is that you have to make sure you don’t cycle through dog poo – there is a lot of of it on this section of the route. Dad also discovered that you have to watch out for the wildlife too – he accidentally ran over a massive slug and it splattered all over his knee!

The next village along the line is Rosewell and here I spotted a no.49 double decker bus heading into the village. We stopped here for our first snack of the day: I had an apple and Dad had a banana. After Rosewell, the path becomes much more bumpy and muddy in places as you head into the picturesque Roslin Glen. We didn’t see any dog poo on this section of the path but there was a lot of horse poo to avoid instead… We passed another old station platform and cycled under and over some bridges and through 2 old railway tunnels before we eventually arrived in Penicuik.

Penicuik is a bit bigger and has more shops than Gorebridge but we didn’t go into the town centre,  just stopping for a few minutes to have our crisps. We then turned onto the B6372 and cycled up the really steep hill out of the town and into the countryside. The road was very quiet apart from lots of other cyclists and we stopped for a few photos along the way, including one at Mount Lothian Farm. This road is quite high up and in the winter you get a lot of snow here but today it was far too hot for snow… After a few miles, we took a turning off the road and followed a track through the trees and down to Edgelaw Reservoir. On the way, we spotted a deer and at the reservoir we spotted lots of people fishing. We didn’t spot any fish though.

After the reservoir we left the muddy track behind and went back onto a nice smooth, straight and deserted road which took us a few miles (almost all downhill) to Carrington. It was on this section that I managed to go over 30mph two more times. Dad even went over 35mph at one point. Carrington is a very quiet little village and it has some nice benches so we stopped for our last snack of the day – chocolate digestives! From Carrington, we sped downhill all the way to Gore Glen on the really quiet single track road. Just before the glen, I reached my world record fastest speed of 32.8mph. All these downhill sections came at a price though as the road from Gore Glen back to Gorebridge is uphill all the way. It was fine though because we eaten our digestives so had lots of energy. Soon we were back home, less than 3 hours after we’d left. Amazingly our average speed was also a world record for us today at 10.3mph. 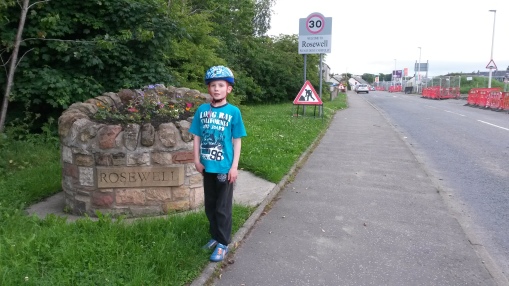 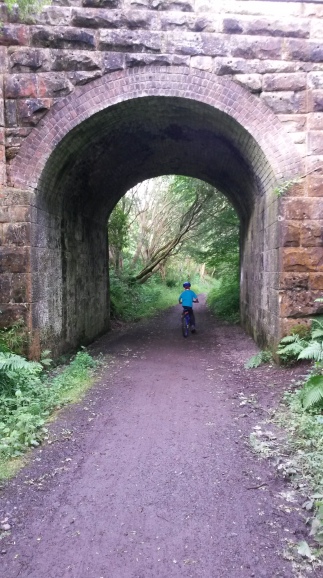 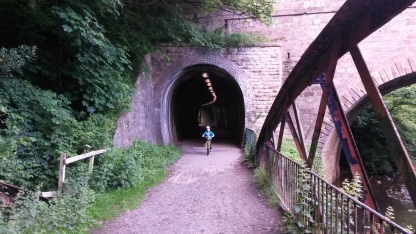 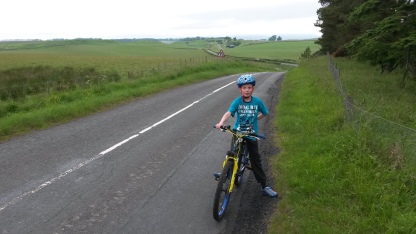 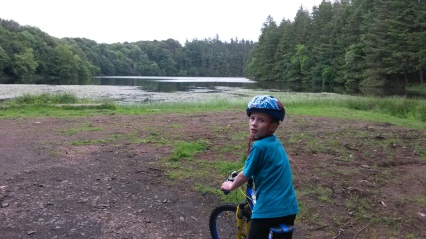