Route out – Edinburgh (South Lauder Road to The Meadows to Slateford to Wester Hailes) to Ratho to Broxburn to Winchburgh to Linlithgow to Beecraigs Country Park to Cairnpapple Hill to Bathgate. For route map click here.

Route back – Bathgate to Livingston Village to Mid Calder to East Calder to Kirknewton to Balerno to Currie to Juniper Green to Edinburgh (Slateford to The Meadows to South Lauder Road). For route map click here. Google Maps is wrong for some of the section through Livingston. Just stay on Route 75 all the way and you won’t get lost.

The weather here has been very cold for weeks so Dad and I hadn’t been out cycling for ages. Luckily, on Saturday it looked like it would actually be a fine day to go for a cycle – still cold but at least it wasn’t frosty for once… Dad wanted to head south (as usual) for a route around the Scottish Borders but I decided that we would investigate two of the really good cycle routes nearer to home which start in Edinburgh: National Cycle Routes 754 and 75.

We parked the car in The Grange which one of the poshest areas in Edinburgh where all the houses appear to be mansions. Not much like Gorebridge then… Here we followed one of the signposted “quiet routes” (no.6) to The Meadows where we joined onto Route 75. After a short section along the cycle path through the park, we followed the route 75 signs onto the road for half a mile or so before turning off onto the Union Canal at Fountainbridge. The path alongside the canal soon becomes route 754, is completely flat and takes you all the way to Glasgow without going on any roads at all. We weren’t going that far today though – our first main destination of the day was Linlithgow, 22 miles away. The quality of the canal path varies a lot along the way. In Edinburgh it is quite a nice surface but is quite busy with pedestrians and dogs so you need to be very careful not to fall in the water or crash into anyone. Outside the city it is often very narrow, muddy, bumpy or squelchy with leaves so I found it a bit of a monotonous plod at times and it was a lot slower than I’d thought it would be. Because you are low down and never go up any hills, the views are not all that good either but there are some interesting bits, especially the amazing aqueducts which carry the canal high up over roads or rivers: the Slateford Aqueduct, the Scott Russell Aqueduct which crosses over the City Bypass and the Almond Aqueduct are all very impressive and it’s worth cycling along this route just to see these. Note that you have to push your bike along the aqueducts as the path is extremely narrow and made of cobbles and you really don’t want to fall into the water… The canal passes through some towns and villages along the way including Ratho, Broxburn and Winchburgh. Eventually, after the bumpiest section of the canal path, we finally reached Linlithgow.

In Linlithgow, I was glad to get off the path and onto a proper road again and we cycled past the train station and into the town centre where Dad said he knew of a really good bakers where we could get some lunch. We ate our (very tasty) macaroni pies beside Linlithgow Loch where we got a good view of Linlithgow Palace. We also had to fend off a flock of pesky seagulls who were trying to steal our food! After that we turned onto the minor road to Bathgate and this turned out to be one of the hardest few miles of cycling I’ve ever done. This road heads south from the town and goes incredibly steeply uphill. We climbed about 350m in only 2 or 3 miles I think as the road winds its way through Beecraigs Country Park. Beware though: this may be an unclassified road (so not even a B road) but it was unexpectedly busy with traffic. This is particularly an issue when you are toiling up roughly a 10% gradient slope at only 3 or 4 mph… However, this was more than made up for with the good views back down towards the Forth where I spied a railway viaduct in the distance. Near the top we turned off onto an even more minor (and thankfully quieter) road which climbed up even further as we cycled past Cairnpapple Hill. From here we had an amazing view back down towards the 3 Forth Bridges and could even see North Berwick Law far far away in the distance. After that came the most fun section as we sped back down the other side of the hill (14% gradient at one point according to the sign) to the town of Bathgate.

In Bathgate we managed to find the signpost for Route 75 next to a supermarket so followed it onto a nice smooth cycle path. The path is nice and wide and mostly flat with some slight ups and down to keep it interesting and fairly fast. It was also very quiet and a pleasure to cycle on. We passed some weird pyramid things and crossed over the M8 motorway before travelling through some woodland that reminded me of Gore Glen near our house. After a while we came to an unexpectedly nice part of the town of Livingston – Livingston Village – not at all like the ring roads, roundabouts and housing schemes of rest of the town. Then the path followed the River Almond, past the football stadium and then headed through the woods to Mid Calder. This is a lovely part of the route and I’ll be coming back here again. Unfortunately, it was around here that Dad got a puncture on his back tyre so we had to waste quite a long time while he changed the inner tube. Dad always carries plenty spare tubes and tools in his bag when we go cycling just in case. It’s actually quite amazing that after over 1000 miles, this is the first time either of us have had a flat tyre. By this time, the light was starting to fade (too dark for photos anyway!) and we still had a quite a long way to go. So we sped as fast as we could through East Calder and Kirknewton (crossing over the level crossing at the train station was the best bit) before heading onto the quiet back road for a few miles to Balerno, near the Pentland Hills on the outskirts of Edinburgh.

By the time we got there, it really was pretty dark and it was clear that our bike lights, though they may have been useful in helping traffic see us, weren’t exactly doing much to help us see as we cycled. Our intended route from Balerno was to follow Route 75 along the Water of Leith until it joined back onto the Union Canal but the cycle path was just far too dark and wouldn’t have been safe. Dad made the decision that we would stick to roads with streetlights and we basically just cycled along the pavement alongside the main A70 road through Currie and Juniper Green for about 8 miles all the way back to the Meadows (passing the Slateford Aqueduct on the way). I’m sure the Water of Leith path would have been much nicer but I’ll have to come back during daylight hours to find out. Although I couldn’t predict that Dad would get a puncture or that the Union Canal route would be so slow, I did learn an important lesson today. In winter when there are less hours of daylight, it would be more sensible to stick to slightly shorter routes rather than ending up having to cycle for an hour in the dark. Still, it was nice to be out on my bike again after such a long break and we even had seafood pizza for tea when we got home! 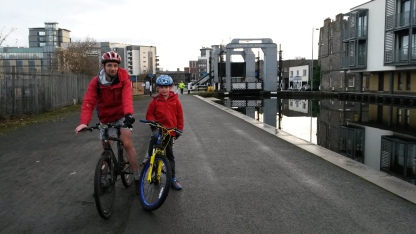 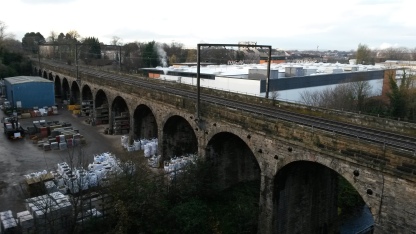 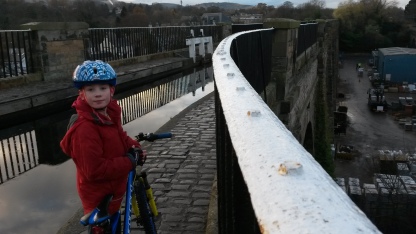 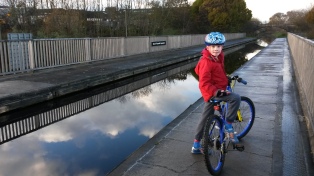 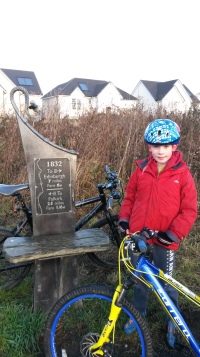 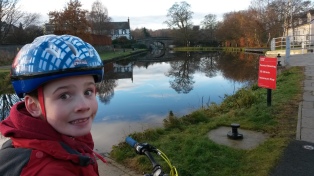 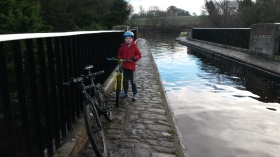 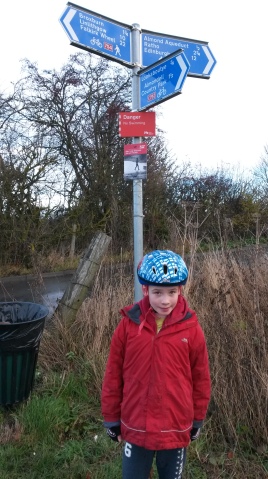 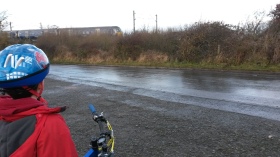 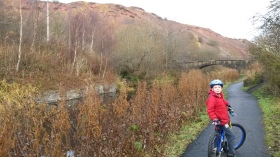 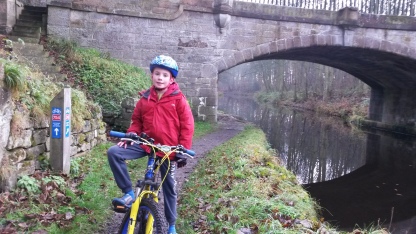 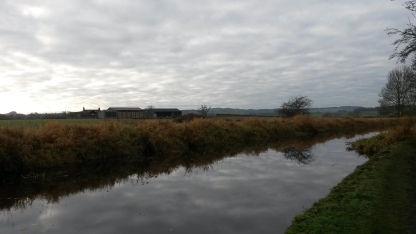 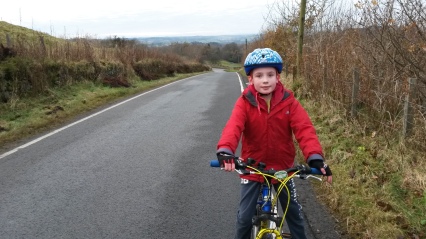 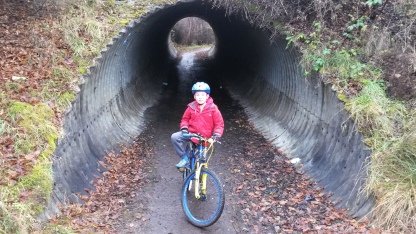 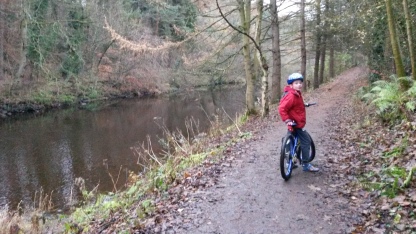 One thought on “Edinburgh to Bathgate Circular Route”