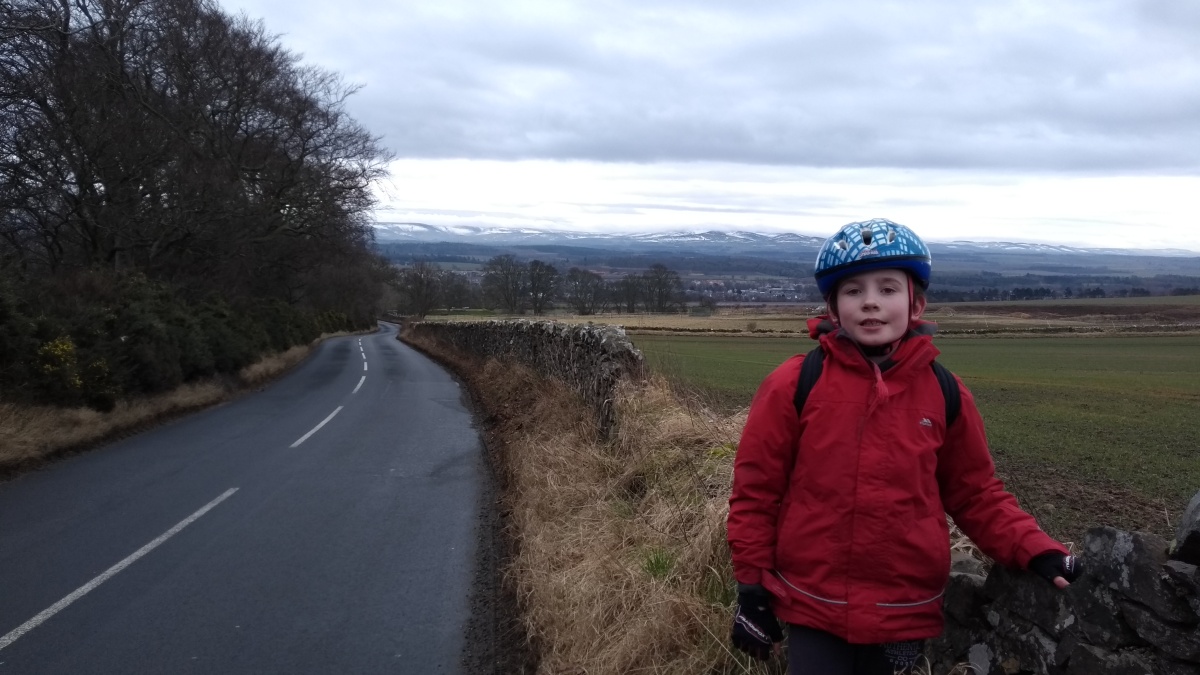 Route out – Gorebridge to Mayfield to Elphinstone to New Winton to Pencaitland to East Saltoun to Bolton to Haddington to Drem to Dirleton to North Berwick. For route map click here.

Route back – Scotrail train to Edinburgh then Borders Railway train to Gorebridge.

There seems to have been a lot of cold weather this winter compared to normal. I don’t mind this because we’ve been able to go out sledging and building igloos but it has been virtually impossible to get out for a decent cycle run for months now due to the snow, ice and wind chill. Amazingly, even though it was still very cold today, there wasn’t much wind at all and the roads weren’t slippy for once so Dad and I decided to venture out on our bikes.

We left the house at 9:30am and took our usual route through the houses, uphill out of Gorebridge and onto the B6372 heading east. Almost immediately we turned left onto the quiet narrow road that heads steeply up to Camp Wood. As we climbed, we got a fine view over to the snow-covered Moorfoot Hills on our left and at the top of the hill, we were able to see right over to East Lothian and the snowy Lammermuir Hills to the south. The Moorfoots and Lammermuirs always look much more impressive when covered in snow I think. From Camp Wood we sped off down the hill to Mayfield with a great view of the equally impressive and snowy Pentland Hills on our left as we free-wheeled down the smooth road. 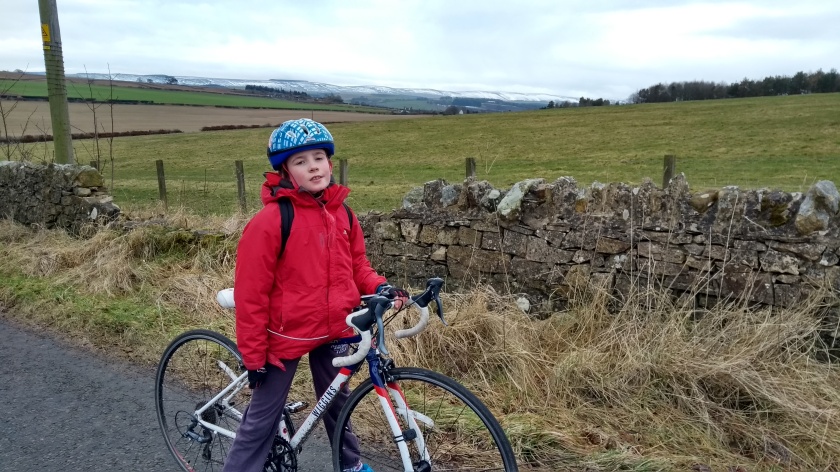 After skirting around the edge of Mayfield, we started climbing up another steep narrow road for half a mile or so until we reached the highest point of the route at d’Arcy. After cycling only 2.5 miles so far we’d already climbed 300 feet – possibly one of the hardest starts to a route ever! From d’Arcy, we turned left and cycled along the quiet high road (there was even some snow at the side in places) and we enjoyed some amazing views over to Edinburgh and the Pentland Hills once more. We then turned left at the next junction and headed north towards Whitehill for a few hundred yards before turning right onto the rather bumpy but very scenic road to Fordel Mains farm, along which you get some of the best views in Midlothian as you look down upon Edinburgh and Fife in the distance. Soon enough we were speeding down the hill along the (very quiet) A6124, out of Mid and into East Lothian where we had to stop at the traffic lights at Crossgatehall.

When the lights changed to green we turned right onto the B6414 and climbed up the gradual hill for a couple of miles to the village of Elphinstone. This road is reasonably quiet and you get some good views on your right of the Lammermuir Hills as you cycle along. Just past Elphinstone we turned right at the sign for “Research Centre” and after half a mile or so of easy riding (passing the research centre on the way – no idea what they research there though) we turned right onto another B road briefly before a quick left turn onto another narrow and flat but smooth back road which took us quickly to the B6355. This is a nice road, not too busy and it has a good surface. It’s also very scenic, with good views of the hills in front of you. We even spotted a couple of rather grand 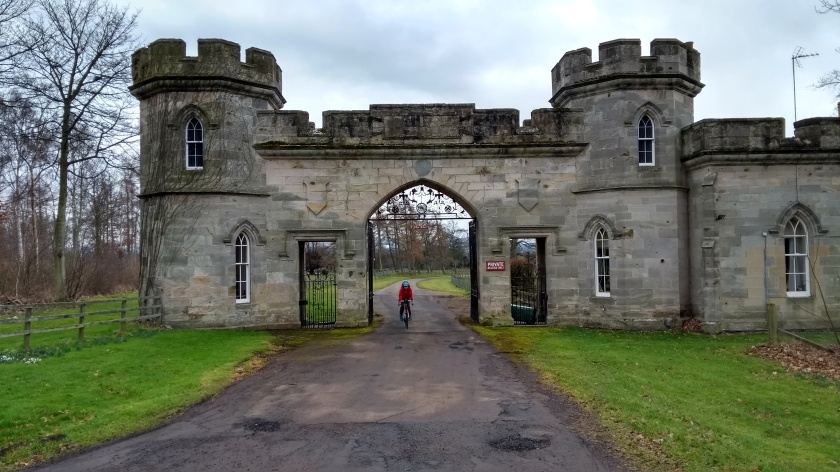 turreted gatehouses to private Estates near Pencaitland so we stopped to have a nosey as usual. Not far after East Saltoun, we turned left onto the B6368 and sped down the hill to a nice little village called Bolton. We didn’t stop though and carried on along this road, following the River Tyne until we came to the town of Haddington.

As you enter the town, there is a bridge across the river with traffic lights and it was here that I had my first ever crash. As we approached down the hill towards the bridge, the lights changed to amber and even though there would have been plenty time to get across, Dad apparently disagreed and decided to stop for some reason. I must have braked too hard and my back wheel skidded on the damp road surface and I ended up on the floor. Thankfully there was little damage to me (just a small bump to the knee) or the bike but it was a bit scary at the time. It was lucky the road was quiet and there were no cars anywhere near us at the time. So after dusting myself down and having a quick bag of crisps and an apple, we were back on the road again. We left the town as quickly as possible and took the road signposted for Camptown. This is a lovely road that takes you steeply up into the lesser known Garleton Hills. At least it should be a lovely road as it’s a nice smooth surface and you get great views behind you of the lammermuirs and then a fine view of the Firth of Forth as you descent the other side of hill. Unfortunately, far too many cars seem to use this road (probably as a short cut) and many of them drive far too fast and overtake when it’s not safe to do so. So take care if you decide to cycle this way.

In fact, taking care is the main piece of advice for the last 8 miles of the route from here to North Berwick. We’ve tried out a few routes to North Berwick now and each time, the section from the Haddington area northwards has been entirely unpleasant. Even though the roads are only B class, do not be fooled by this. They are very busy (busier than most A roads in Midlothian), have lots of bad corners and there are a lot of bad drivers out there. At one point just before Drem, a white van decided to overtake us even though there was a car coming the other way. Shortly after that we observed the worst piece of driving ever on the B1345 near Fenton Barns when an impatient driver decided he could wait no longer to get past so he decided use a layby on the left to undertake us! Dad couldn’t believe it and indicated this to the driver by holding up one of his fingers…

Thankfully, the rest of the journey was less eventful but was completely spoiled by the heavy traffic. We were glad to turn off briefly into the peaceful village of Dirleton and then onto the shared use cycle path next to main road that took us to our destination. After all that, we decided to go for a well deserved ice cream before getting the train home. As much as I like East Lothian, I think we’ll be sticking to the much quieter and more pleasant southern and western parts of the region from now on. 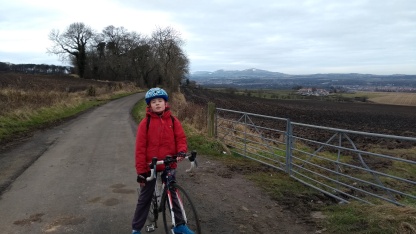 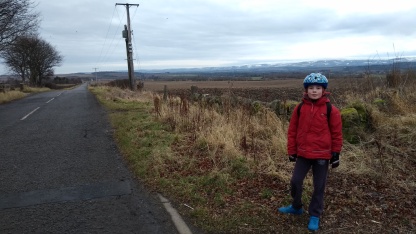 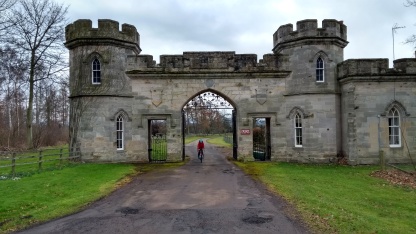 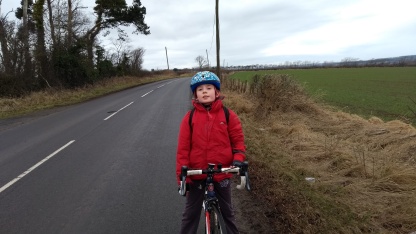