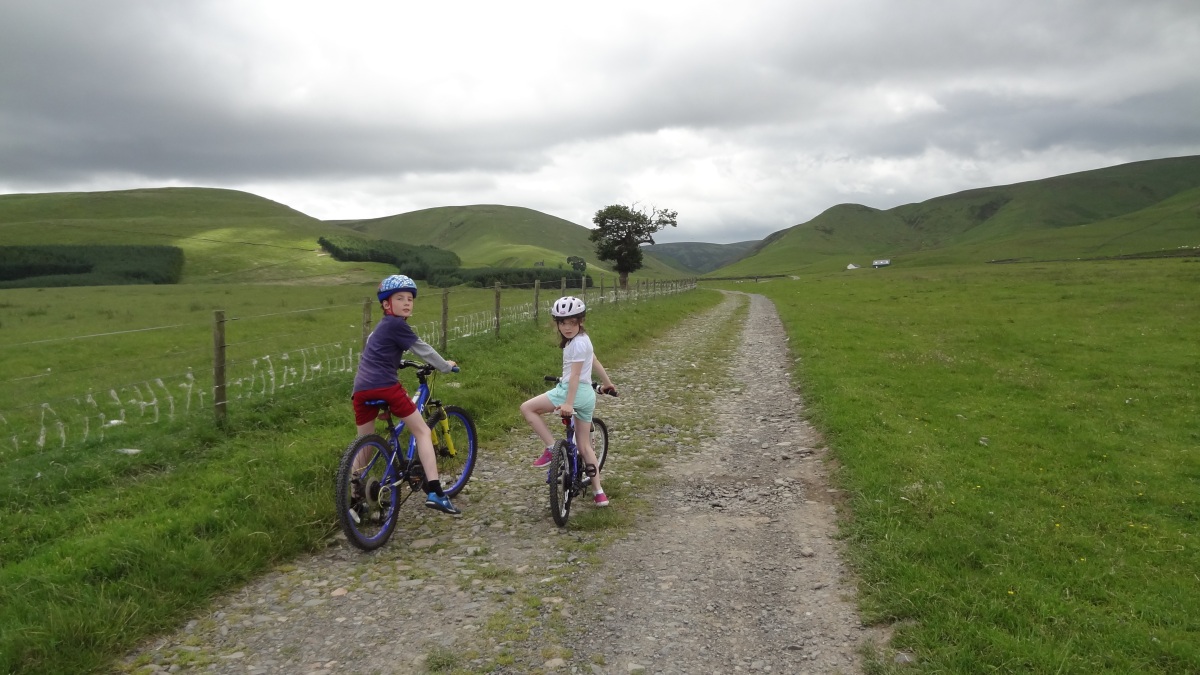 Route out – Gorebridge to Fushiebridge to Middleton to Gladhouse Reservoir to Moorfoot to Moorfoot Hills. For route map click here.

Route back – Moorfoot Hills to Moorfoot to Carrington to Gore Glen to Gorebridge. For route map click here.

Saturday was Gorebridge gala day. It’s a great day out if you enjoy bagpipes, junk food, expensive rides and even more expensive bouncy castles, surrounded by hundreds of noisy drunk people and screaming kids… It’s actually really not that bad but this year Dad and I decided to give it a miss because the weather was nice, so we went cycling instead. My sister Isla (who is only 7 years old) came with us too. It turned out to be her longest ever bike ride. It also turned out to be a bit of an adventure so read on…

After an early lunch of boiled eggs and soldiers, we took a familiar route out of Gorebridge along Vogrie Road and out into the Midlothian countryside. The narrow road took us through some Beech trees, high up above the Borders Railway line and soon we were at the lovely place called Fushiebridge where we stopped to look for trains as we crossed over the bridge to the other side of the train track. Sadly no trains to be seen today. We then sped down the hill until reached the junction with the main A7 road where we saw our first cars of the day. Rather than cycle on the busy road, we turned left and took the pavement along the side and cycled for a few hundred yards until we reached the Midlothian Council gritter depot. At that point we (very safely) pushed our bikes across the A7 and took another very quiet, narrow and very smooth road for about a mile or so (passing the Middleton Limeworks and climbing a massive hill) before we came to the crossroads at Middleton where we stopped for our first snack of the day (apple, orange and banana for me, Isla and dad). From Middleton, we got an amazing view back through the trees to Gorebridge which looked surprisingly nice in the sunshine with Arthur’s Seat in the background.

Next we followed the signpost for Bonnyrigg and cycled around the back of the limeworks quarries. You get some of the best views of the Pentland Hills, Edinburgh and even East Lothian along this road as it’s very high up. It’s also almost traffic-free but it is part of Cycle Route no.1 so you normally see lots of cyclists. Not today though strangely enough, despite the good weather. We turned left at the next proper junction, speeding past Outerston Farm and fields of sheep as we headed in the direction of the Mootfoot Hills. At the end of this road, we turned left again and up a steep hill and a mile or so of deserted back road later, we had arrived at Gladhouse Reservoir which looked nice in the sunshine with the Moorfoot Hills behind it. We stopped here for another snack (Yorkie buttons for Isla and oatcakes for me and dad) before heading along the smooth, mainly flat narrow road around the side of the reservoir.

After a few minutes we reached a junction and turned left onto another quiet and equally smooth road for only a few hundred yards before turning left at the sign for Moorfoot. Straightaway, we got an amazing view of the Moorfoot Hills as we cycled the half mile or so to Moorfoot Farm where the proper road ended. There, we followed a bumpy track, climbing gradually as we went, passing the ruins of Hirendean Castle and following a stream (which was actually the River South Esk) further and further into the hills. We’d never been along here before so weren’t sure what to expect and it was really quite hard to cycle on but we managed reasonably well. Even Isla didn’t complain too much… Eventually, with Bowbeat wind farm not too far ahead on top of the hill and just before reaching a small hut, the path forked in two. Dad checked the map and worked out that the left path would eventually take us to the top of the hill and to the highest point in the area called Blackhope Scar (651m high) which lies right on the border between Midlothian and the Borders. I’d always wanted to go there so we went that way. It was far too steep and bumpy to cycle on though so we left the bikes (and helmets) and decided to take a walk up to the top of the hill. It was a short and easy walk to the top and we got an amazing view of the wind farm as the sun came out from the clouds. Unfortunately, the path ran out about 100m below (and probably 20 minutes from) the summit and the grassy ground was very squelchy and boggy and we didn’t have walking boots on, so we decided (or rather Dad decided) it wasn’t worth getting wet feet for the sake of getting to the very top. So we headed back down the bumpy path to our bikes and we sped downhill along the bumpy track back to Moorfoot.

Leaving the hills and the Moorfoot road behind, we turned right and headed uphill on the quiet road until the junction with the B6372. We turned right and cycled for a mile or 2 along a very straight road, mostly downhill and with loads up humps and hollows to make it fun. Just outside Temple, we turned left and followed another quiet road for a mile or so to the village of Carrington where we turned right onto the very narrow back road to Gore Glen. This road is all downhill for about 2 miles and is great fun to cycle on. Just watch out you don’t go too fast down the very steep section just before the Glen as there’s a sharp bend at the bottom of the hill and it would be easy to end up in the trees… Then there was another steep hill to get up from the Glen and back to the junction with the A7 main road. From there we turned left and headed up one last hill into Gorebridge through the new housing estate and then Arniston Park before heading home. It wasn’t the longest cycle route in the world (though it actually was a world record for Isla!) but it was certainly one of the most interesting, most scenic and most enjoyable. 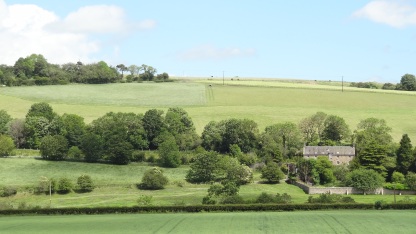 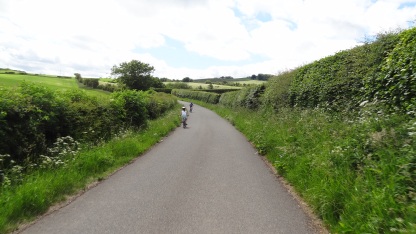 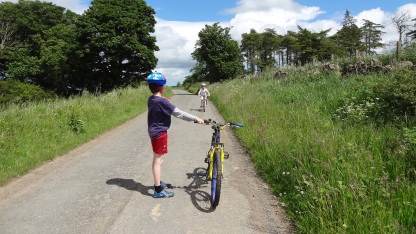 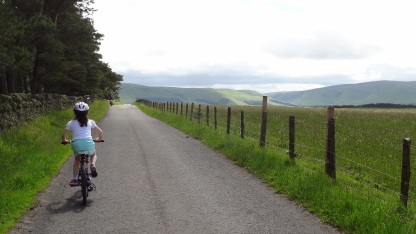 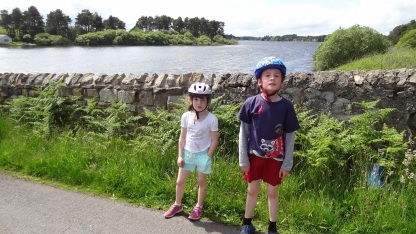 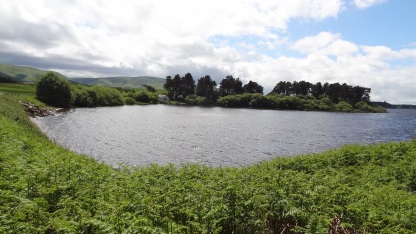 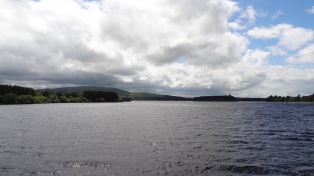 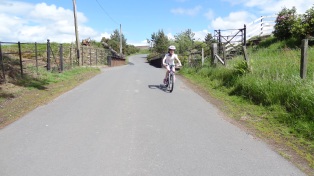 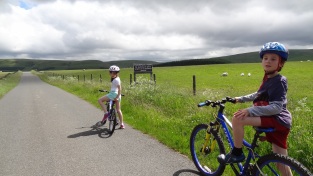 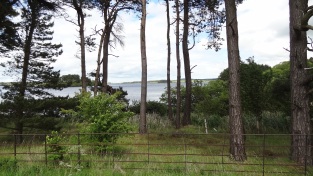 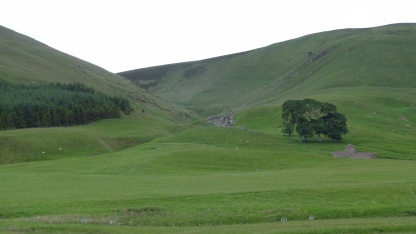 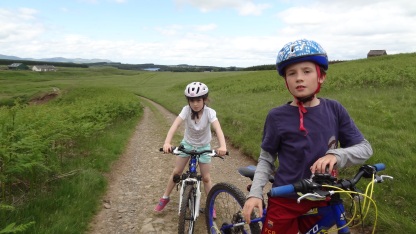 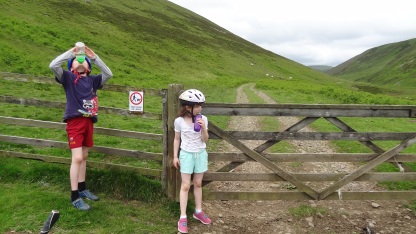 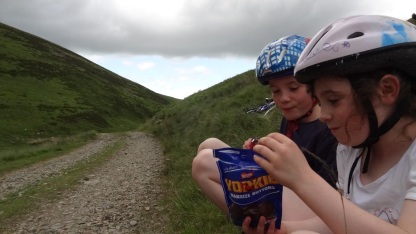 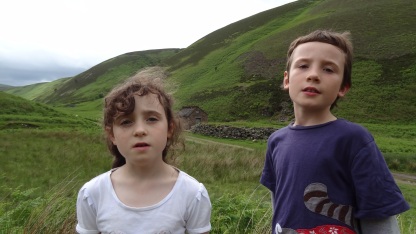 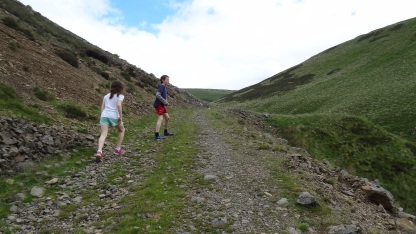 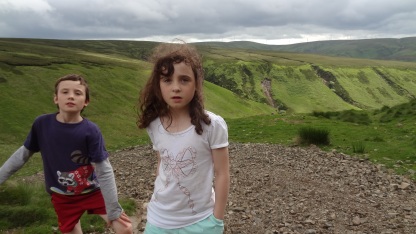 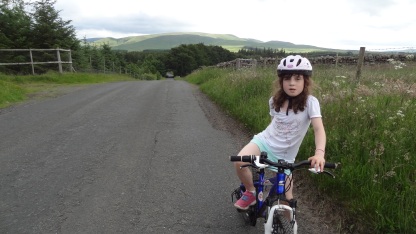 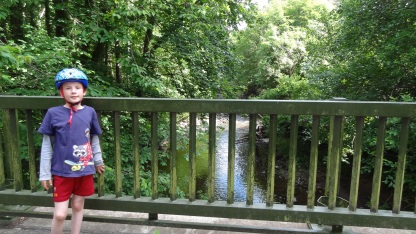