Route out – Gorebridge to Mayfield to Whitehill to Dalkeith to Eskbank to Bonnyrigg. For route map click here.

Route back – Bonnyrigg to Dalhousie to Carrington to North Middleton to Borthwick to Gorebridge. For route map click here.

It is wild raspberry season at the moment so for our latest cycle run, I decided to take Dad on a rather up and down and winding route past most of my favourite local foraging spots. And I certainly filled my face along the way…

We had an early lunch of scrambled eggs and smoked salmon and then headed out of Gorebridge along Stobhill Road and then turned right onto the Crawlees Road which took us the mile or so to Mayfield. As I’ve mentioned before, Crawlees Road is to be avoided during the week because it is always very busy with lorries and vans using the industrial estate. However, at the weekend it is very pleasant to cycle on, with a smooth surface and because it is quite high up, you get brilliant views of Edinburgh, the Pentland Hills and most of Midlothian down below. At the junction, we turned right onto the B6982 into Mayfield. It’s not the most scenic place in the world – it’s basically one giant housing estate – but we cycled through the residential streets which took us steeply uphill until we eventually emerged from the houses and onto a narrow road which took us into the countryside and to a tiny place called D’Arcy at the top of the hill. It was here that we spotted an interesting signpost where the signs appeared to indicate that it was 2 miles and slightly downhill to Edgehead or 3 miles and much more downhill to Dalkeith. We chose Dalkeith and it was great fun free-wheeling at around 30 mph all the way to there in only a few minutes. We passed through the village of Whitehill on the way and briefly enjoyed the amazing view over Edinburgh and across the water to Fife as we sped through.

In Dalkeith we passed through some more residential streets and then joined the cycle path of cycle route no.1 which we have written about lots of times before. The path is very nice to cycle on and takes you through the Newbattle Estate and past the golf course. Most importantly though, there are millions of wild raspberries to eat along the way – including lots of delicious yellow ones. We had to keep stopping every few yards to stuff our faces so this really slowed down our average speed today. Oh well…

We basically followed route no.1 cycle path for a while after that, passing through Eskbank station (where we saw a train) and then into Bonnyrigg (more foraging along the way). At Bonnyrigg, we headed off the path but stayed with route no.1 and turned left onto the B704 in the direction of home – but we weren’t going home just yet. At the crossroads next to a church, route no.1 turns right in the direction of Carrington. We were going there but decided to take a long cut so headed straight on up the hill to Dalhousie Castle. We stopped near the castle, just before the bridge with traffic lights, to forage once again at another large patch of raspberries at the roadside. From here Dad got a great photo of Newtongrange with the old coal mine (now the mining museum) in the background. Then we crossed the bridge at the green light and headed uphill for a short distance. Just before the Lothian Cat Rescue place on the right, we turned off the road and onto a path that we know. It’s rather narrow at first and very overgrown but we managed to cycle on it reasonably OK as we passed fields of sheep and cows. The track ended at a gate which we discovered was padlocked. It tried to lift my bike over but it was too hard so Dad had to do it. It was rather annoying and given that the path is actually a signposted walking route, we thought it was rather strange that the gate was locked. Anyway, back on tarmac again, we turned right and headed down the quiet, narrow road into Gore Glen and then steeply back up the other side, passing the fields and trees that make up some of the nicest parts of Midlothian. At Carrington Barns Farm, we turned right onto a very narrow and very bumpy road, lined with trees on both sides and after half a mile or so we came to a junction with a much smoother road where we turned left, back onto cycle route no.1 once more.

We soon passed through Carrington Village and then sped along the quiet and smooth road for a mile or 2 to the junction with the B6372. We turned left here following the route no.1 signs again, soon turning off the main road onto another narrow back road which took us up a short but steep hill to Castleton farm. At the farm, we turned left onto the quietest road in the world. We cycle on it quite often but I can’t remember having ever seen a car on it and only 1 other bike. We like to call it our secret road. Anyway, it heads gradually uphill for a quite a long time. You get some of the best views along the way over to the Pentland Hills, Edinburgh and even Gorebridge! (Gorebridge even looks nice from a distance…) At the top of the hill you can even see North Berwick Law which is probably over 30 miles away in East Lothian. We then sped down the other side of the hill as fast as we could, trying not to crash at all the sharp corners. We managed thankfully. Then we turned right and soon after (just before the Limeworks) turned left into the village of North Middleton (via a handy underpass which allows you to avoid crossing over the busy A7 road). We scooted our way over the North Middleton speed bumps and out of the village on the quiet narrow road and down the steep hill to Borthwick, enjoying the views of the castle and the Borders Railway along the way. After that we had a killer climb up the other side, probably 2 miles of constant steepness. Dad couldn’t keep up with me! Eventually, at the top of the hill, just half a mile or so from home, we got amazing views of Gorebridge, the Pentland and Moorfoot Hills so all the hard work was worth it. From there it was then another simple free-wheel the rest of the way home.

It may have been only 22 miles but that route climbed over 1600 feet which really does prove just how hilly Midlothian really is. Oh, and if you like wild raspberries, Midlothian is also a great place to visit in summer… 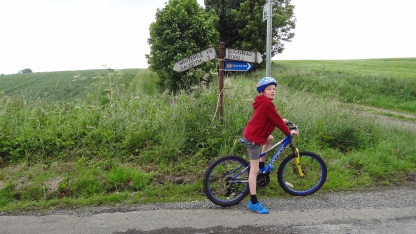 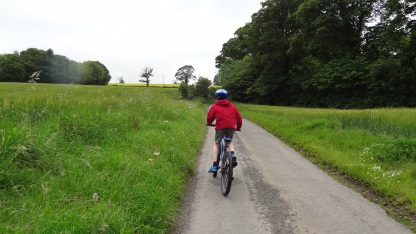