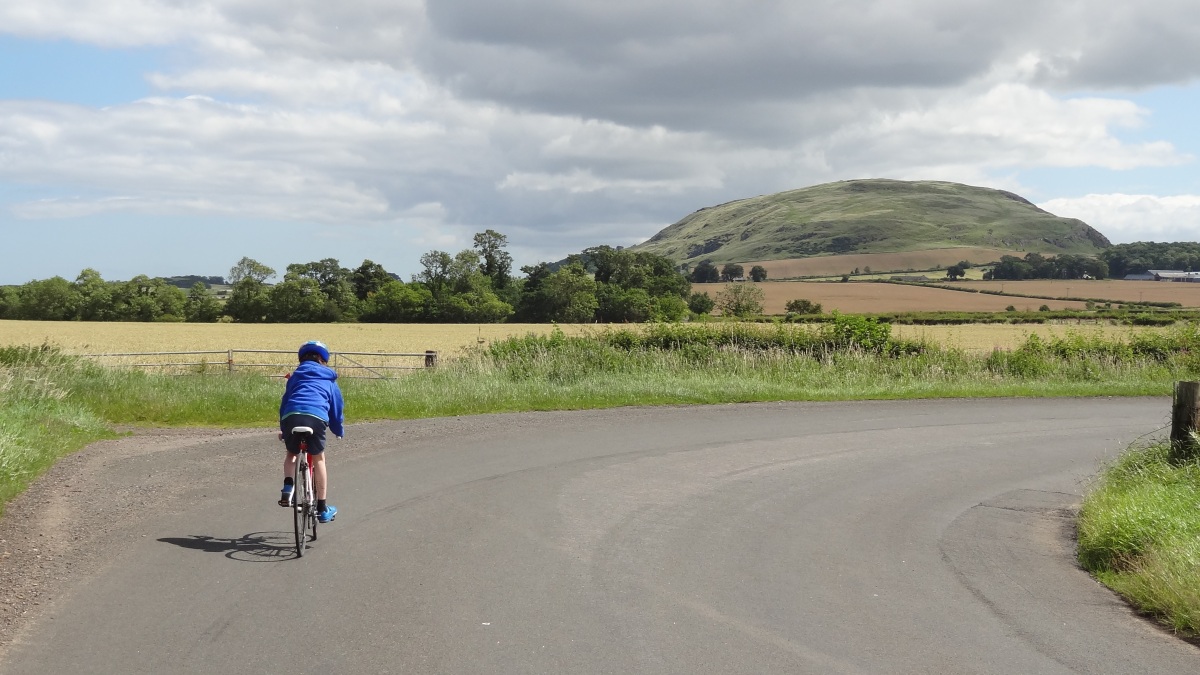 Route out – Gorebridge to Crichton to Humbie to Longnewton to Garvald to East Linton to North Berwick. For route map click here.

Route back – 2 Scotrail trains (North Berwick to Edinburgh then Edinburgh to Gorebridge).

A few weeks ago we went on the train for a day out in North Berwick on the East Lothian coast. That day we climbed the Law Hill, went crab catching at the beach and had an ice cream. On the way home, the train conductor didn’t bother to check our tickets. Dad noticed that the return tickets were valid until the end of the month so we decided there was nothing to stop us using them a second time. Of course we’d need to find some way to get to North Berwick first…

So last Sunday, Dad and I left the house at around 8:30am on our new road bikes (so much faster than my old mountain bike!) with our train tickets in our pockets and headed for North Berwick again. We began by cycling along some of my favourite quiet Midlothian back roads, including the steep hill near Crichton. The roads are mostly very good smooth surfaces around here and there’s lots of nice scenery and wildlife to see. At one point a blackbird decided to fly right through the frame of Dad’s bike when he was travelling at over 20 mph! We stopped at a ford in the road at the border with East Lothian for our first snack of the day (banana for me and apple for Dad). This was about 9 miles in to the ride and we’d still seen no traffic at all.

Soon after, we were on the B6371 heading for Humbie when a car finally drove past. I spotted some wild raspberries so we stopped to stuff our faces as another car and a whole load of cyclists sped by. At the junction in Humbie we turned left onto the B6368, crossing a river and up a very steep hill until the Lammermuir Hills appeared in the distance on the right hand side. This a great cycling road as it has a nice surface and lots of straight bits and interesting humps and hollows but we didn’t stay on it for long today as we turned onto a narrow road on the right, heading towards the hills. East Lothian has lots of amazing ancient road signs dotted around the countryside (with distances give to the nearest 1/8 of a mile!), and it was at one of these that Dad made a wrong turning and we ended up back at the B6368 by mistake. Rather than go back, we turned right onto this road again and then took the next proper road on the right to head uphill and into the middle of nowhere once again. At the top of the hill we got a great view of the Lammermuirs on one side and Traprain Law and North Berwick Law miles away in the distance. 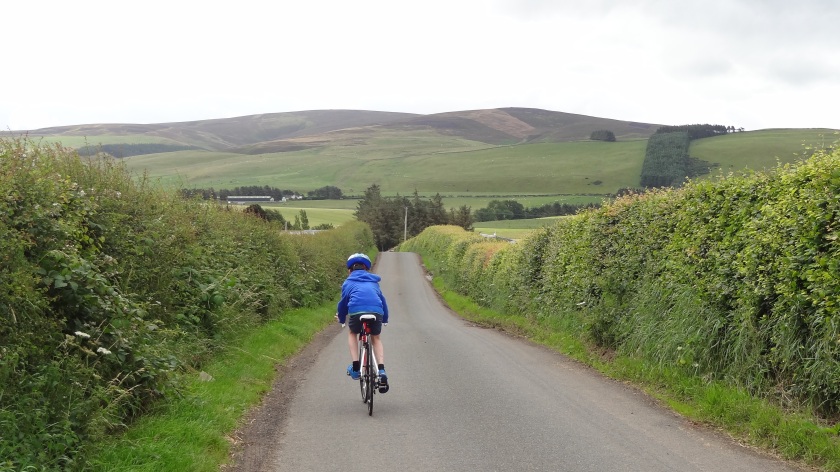 The next while was spent in some very remote parts of the region, going up and down a lot, skirting along the edge of the hills. When you think of East Lothian you think of the coast and beaches and golf courses and tourists and this area really felt a million miles removed from that. It was fantastic cycling territory though and we saw loads of road cyclists when we were there and basically no cars. At one point Dad also saw a ferret scuttling across the road in front of us but I missed it… The only real village we passed through was Garvald and after that we had to climb a mammoth hill at Papple before we finally started to get some good views over to the East Lothian coast with the impressive Traprain Law not far away now. We took a rather round-about route which took us up quite high and then down a long fast hill before going right round to the other side of the Law, where we joined up with Cycle Route 76. This took us onto a tiny road past the ruined Hailes Castle where we stopped for lunch of oatcakes with crab and cheese. Tasty. Note that this road may be very narrow but does have a fair amount of cars using it to get to the castle so be careful. After that, it was mostly downhill to the picturesque village of East Linton where we stopped in to say hello to my cousins Ella and Angus. Oh, and to eat their biscuits and use their toilet too…

In East Linton, dad spotted an incredibly stupid signpost which pointed to North Berwick in two completely different directions. We chose left and headed uphill on the B1377 for a short distance before turning left onto the first road we came to. This quiet road gave nice views to the west and after a couple of miles of pleasant cycling, we came to the junction with the B1347 which took us past the Museum of Flight. Immediately we noticed that this road was very very busy. It might have been because it was a sunday and the weather was nice but it wasn’t much fun to cycle on. It’s also mainly uphill and there’s a lot of bad corners on it (some right angled bends too) which make it hard for cars to overtake safely. We witnessed some rather dangerous overtaking today by an idiot in a BMW. Thankfully the driver failed to kill himself or anybody else… If we ever come this way again, we’ll certainly try and find a quieter road from East Linton to North Berwick. Eventually, we got to the top of the long, gradual hill and got some stunning views of North Berwick Law with the Bass Rock in the distance.

Dad actually spent too long taking photos that we got to the train station 1 minute after the train had left! That left us with  an hour to kill before the next train so we cycled down the hill into the town centre and bought come ice creams… The train journey back to Edinburgh was rather interesting as there were only 2 bike spaces but at least 12 bikes managed to cram their way into the carriages. Luckily the ticket conductor didn’t seem to be too bothered and everyone made it back to Edinburgh OK. We’d made it this far without having our tickets checked again so we were already planning an alternative route to North Berwick to re-use the tickets once more. Most annoyingly though, on the train back to Gorebridge, this conductor actually bothered to check our tickets, so those plans have had to be postponed – for now. 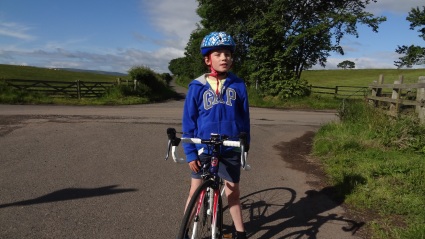 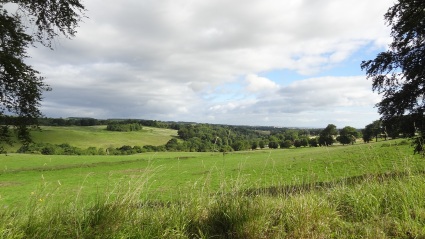 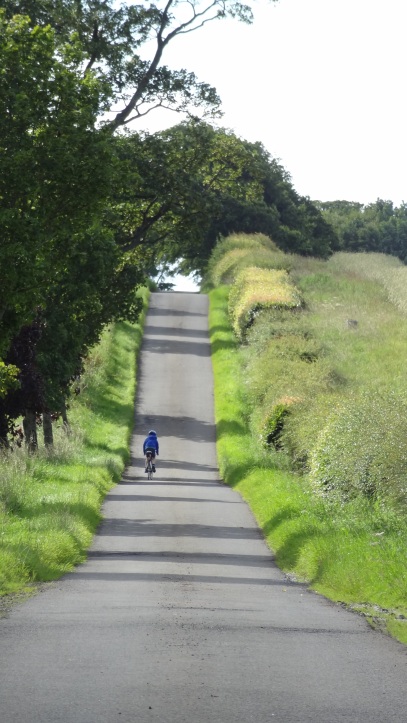 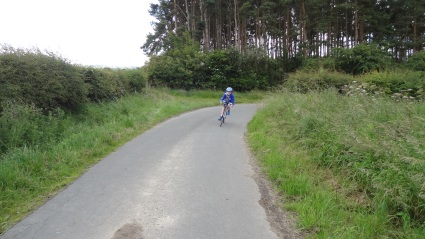 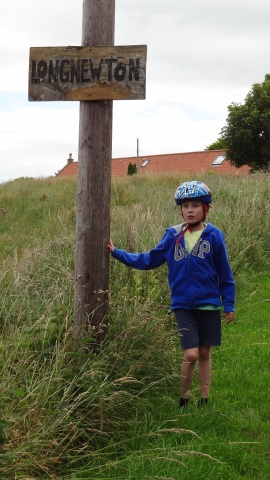 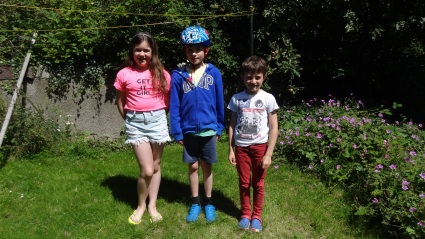