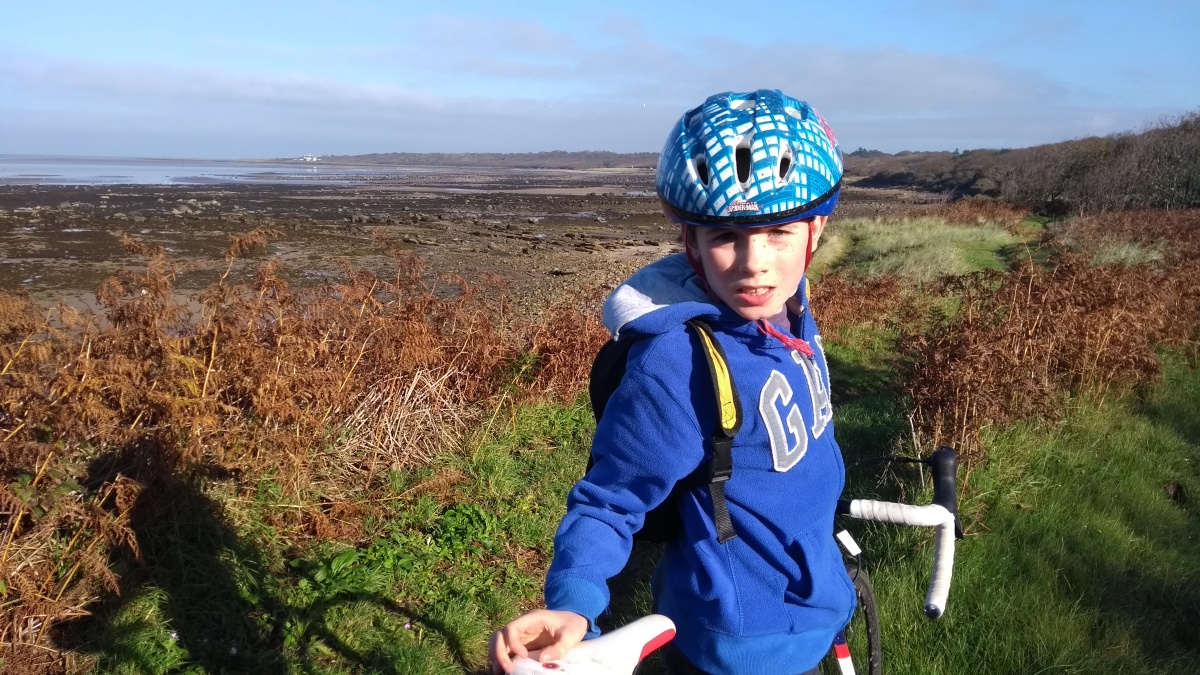 Route out – Gorebridge to Pathhead to West Saltoun to Pencaitland to Boggs Holdings to Longniddry to Aberlady to Gullane to Dirleton to North Berwick. For  route map click here.

Route back – North Berwick to Edinburgh train, then Edinburgh to Gorebridge train.

During the school holidays in October we only had a about one day when the weather wasn’t either wet or very windy or both. So, Dad and I made the most of that day and went for a cycle to North Berwick in East Lothian which is, conveniently,  home of our favourite ice cream shop. We had cycled there before earlier this year but this time I decided to take Dad a much more direct route which is mostly flat or slightly downhill for almost the whole way so it was a nice easy ride.

The route began with a climb straight up and out of Gorebridge to the top of Lady Brae (basically the only hard hill of the day), but soon we were speeding along the B6372 in the sunshine, passing Vogrie Country Park, heading East towards the the coast far away in the distance. This road is sometimes a bit busy with traffic but not today, and it was a pleasant ride along the smooth road surface for a few miles. Just after the village of Dewartown we turned right and zoomed down the steep hill into Ford, admiring the impressive Lothian Bridge viaduct on the left as we climbed quickly up a short steep hill into Pathhead. The viaduct carries the traffic along the busy A68 road and when we reached the village, we had to wait for a good couple of minutes for a break in the traffic before we were able to cross the road and continue our journey on a minor road which took us downhill through some woods and then past some lions guarding a grand 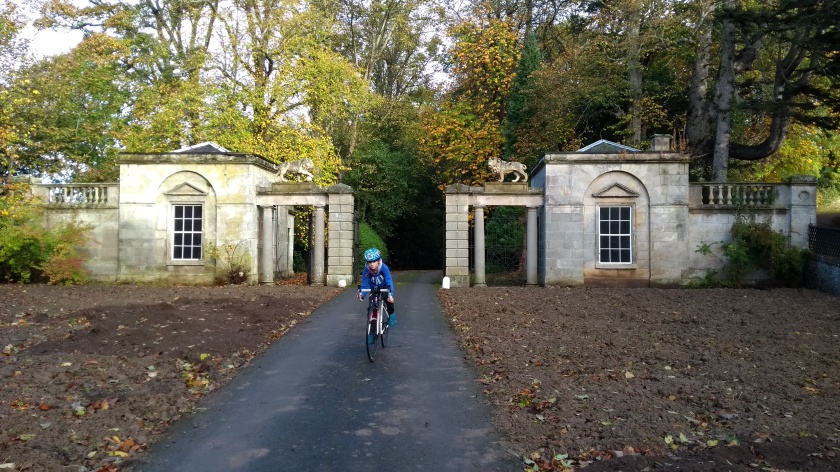 entrance to a country estate. We stopped long enough for a photo before carrying on along a flat and narrow single track road which took us out of Midlothian and into East Lothian. There had been a lot of potato harvesting recently around here and annoyingly, a good part of this road was thick with mud. Even going as slow as possible we managed to get ourselves and our bikes caked in mud. Dad got dirt stuck between his brake pads and discs and it was making a terrible grinding noise so once the mud ended and when we got to the junction with the B6371, we stopped and he used some water to clean out the brakes. Thankfully the horrible noise stopped…

The next part of the ride took us through quiet East Lothian countryside along lovely wide and smooth road with almost no traffic at all. Not far past Glenkinchie distillery we arrived in the tiny hamlet of West Saltoun, home of my favourite bus stop. Very few buses actually stop there but amazingly, we timed it perfectly as just after we stopped the EVE 123 Gifford Circle bus drove past. This may not sound all that exciting to you, but it was for me because I love buses! Anyway, we sat in the shelter to have a snack of crisps and apples before carrying on. 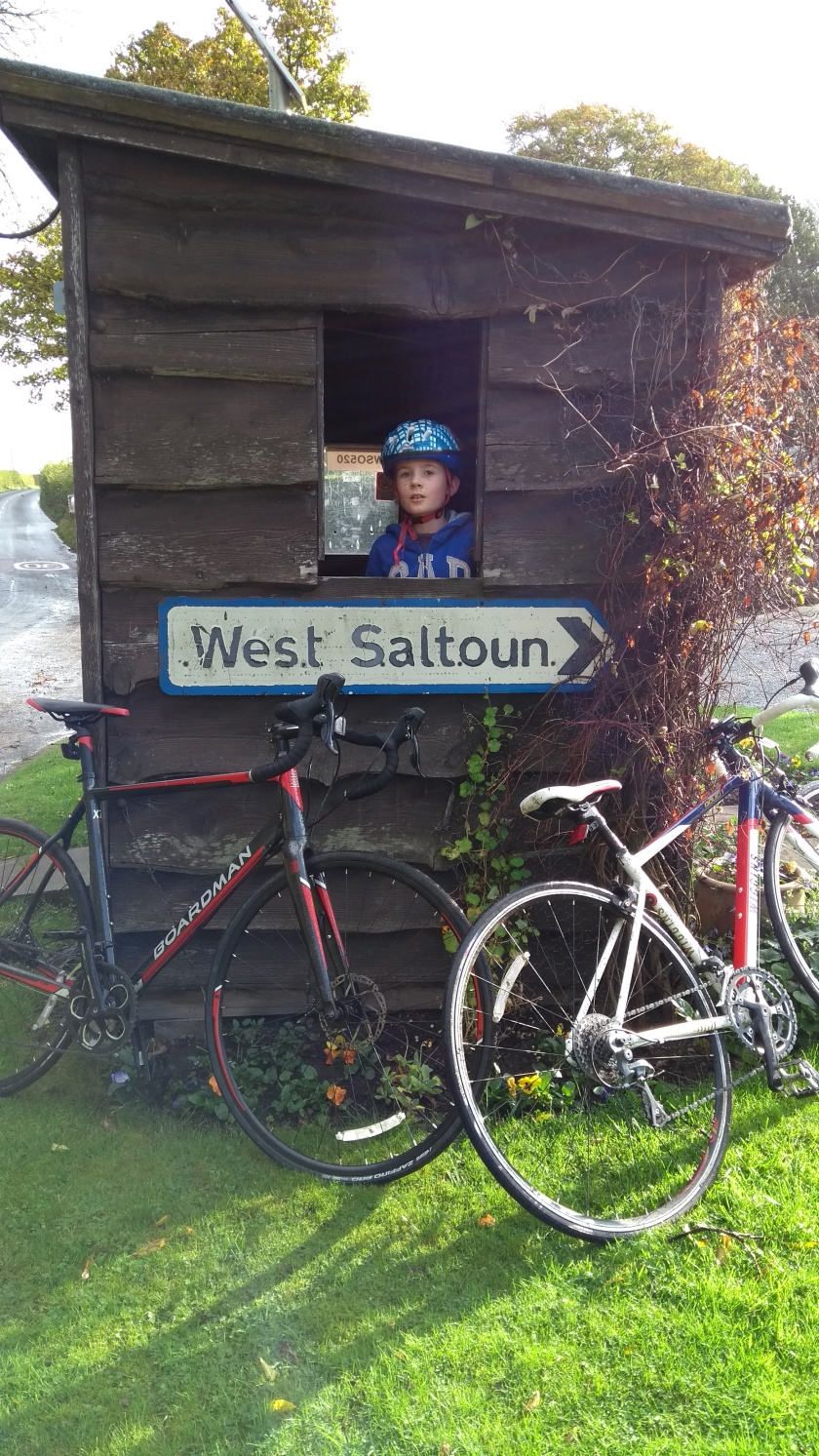 After a short straight section of minor road, we turned left onto the B6355. This road was a wee bit busier and was also rather muddy in places but soon we reached Pencaitland which is a lovely village. We didn’t stop there though and carried on, straight over the crossroads next to the war memorial and then turned right onto the B6363 which immediately took us through the oddly named place called Boggs Holdings. As well as having a weird name, it also has some of the most horrible, bumpy, worn out road surface you will ever cycle on (a mountain bike with full suspension would be recommended here!) and it’s also quite busy with traffic for some reason. Eventually the road surface improved and we crossed over the busy A1 road and then had a fun long downhill stretch until we reached Longniddry. Just outside the village, we got our first view of the sea so we stopped to enjoy the view and have few oatcakes. 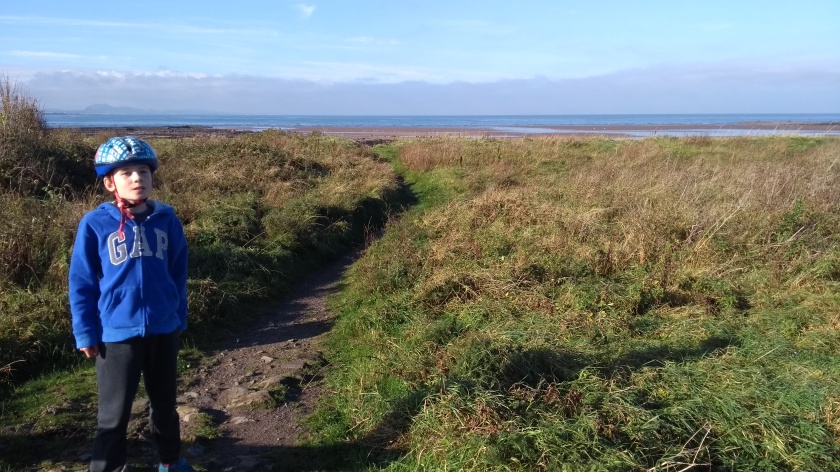 The last 10 miles or so of the route is mostly along a main road, the A198, which is quite a busy road. However, it is very flat so you can go at a good speed, nice and wide which allows cars to overtake safely, and also has some sections where there is a designated cycle lane. So it’s not too bad to cycle on it and it is actually very popular with road cyclists. The views of the coastline, beaches and golf courses as you cycle along are stunning too. We also saw plenty of buses along the way too including the East Coast Buses X6 and 124 and Prentice Coaches 111! Just after leaving Gullane, we spotted that there is a shared use cycle/walking path running alongside the road so we hopped onto that to get out of the traffic. Normally we find that these shared use paths are busy with dog walkers etc. but not today and we had a very enjoyable ride along this section. Soon we came to the end of the path and we had a choice of going back onto the road or diverting through the historic village of Dirleton. We chose the historic route where we cycled past the castle where my Uncle Andrew got married (so Dad said anyway as I can’t remember that far back) and also passed by yet another bus. As we left the village we rediscovered the cycle path again and this took us the last mile or so to North Berwick. This section of path was a smooth surface but also very bumpy because of all the tree roots and other stuff trying to grow through the tarmac. So be careful here. In town, we stopped for lunch at Greggs as usual before stuffing our faces with ice cream (2 scoops for Dad!) at Alandas. Then we headed to the station to get the train to Edinburgh. We changed trains at Waverly Station and got the Tweedbank train the rest of the way home. Completely by chance, when we stopped at Newcraighall station, my Mum, sister Isla and baby Catriona also got on the train. They’d been out shopping all day but I think I much prefer cycling all day! 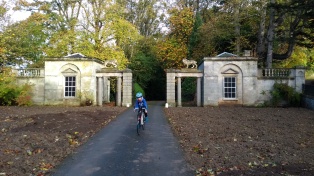 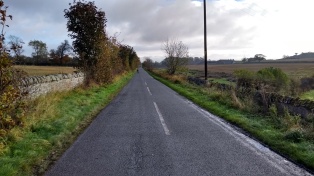 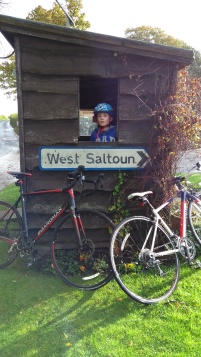 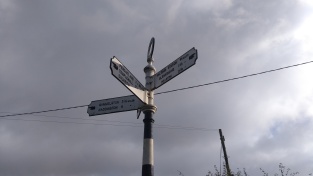 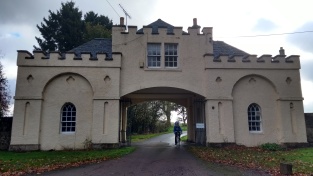 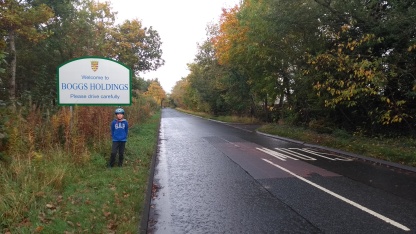 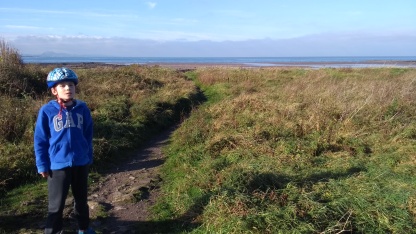 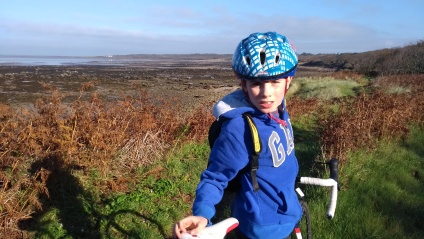 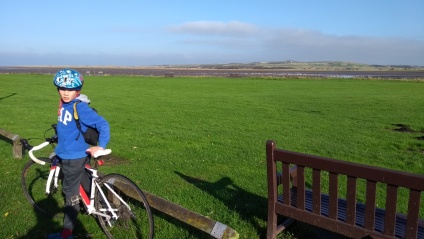 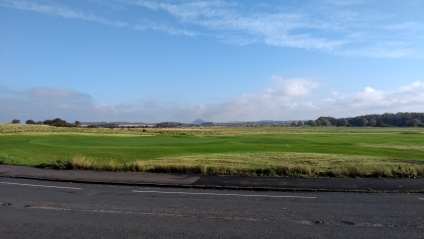 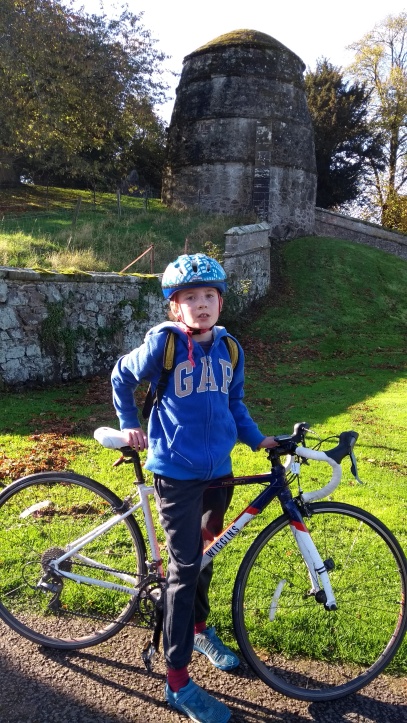 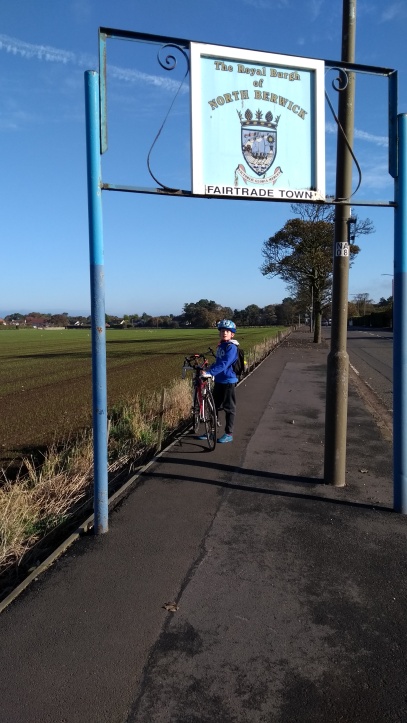 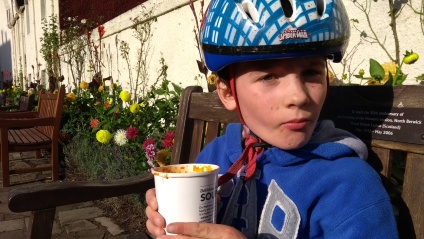 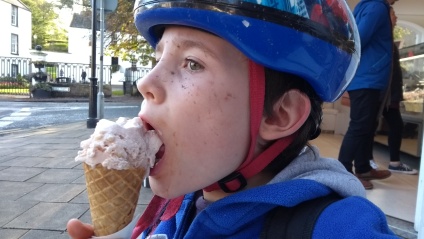 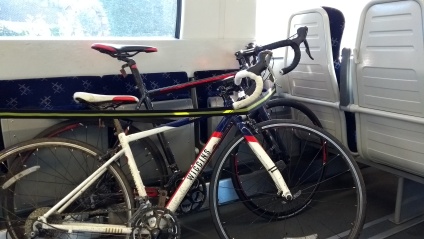 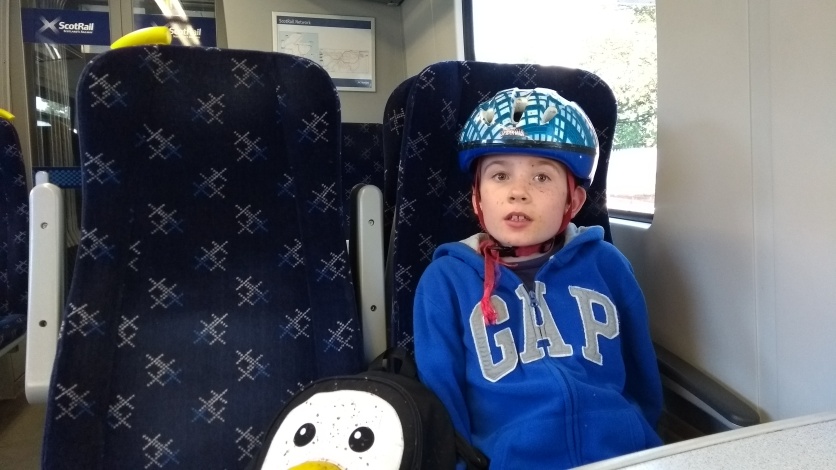