Route out – Tweedbank to Abbotsford to Lindean to Selkirk to Ashkirk to Hawick. For route map click here.

Route back – Hawick to Minto to Newtown St Boswells to Dryburgh to Leaderfoot to Newstead to Melrose to Darnick to Tweedbank. For route map click here. Note Google maps says to go onto the A68 at Leaderfoot but this isn’t necessary. Just head onto the B6360 and immediately pull off the road on the left and use the pedestrian bridge next to the viaduct to cross the river.

The weather forecast looked perfect for cycling on Easter Monday so Dad and I got up at some unbelievably stupid time in the morning and found ourselves (and our bikes) on the 6:49 train from Gorebridge to Tweedbank. Half an hour later we were on our bikes, cycling through a housing estate and then around the lovely Gun Knowe Loch in Tweedbank before crossing the main road and onto the quiet B6360 which goes past the home of Scots writer Sir Walter Scott, Abbotsford House. This road was follows the River Tweed and is lined with trees and has loads of wild garlic growing on the verges which made an amazing smell as we cycled along. After a few miles we had no choice but to turn left onto the main A7 road. It’s only 2 or 3 miles along the A7 to the town of Selkirk but the road was very busy and if you’ve read the blog before, you will know we prefer to stick to the back roads so after only half a mile or so we decided to turn left and take the long cut. The long cut took us onto a deserted single track road which straight away went steeply uphill. We cycled through a tiny place called Lindeen and then up and up and up for a long long long time until at the top of the hill, we came to an un-signposted junction on the right, heading sharply (almost backwards) at a reflex angle. From there it was a very fast and fun descent for a couple of miles down to Selkirk with some nice views of the Borders countryside all around us.

We left Selkirk along the B7009, heading into the stunning Ettrick Valley and following the Ettrick Water for a while. We turned off this road when we saw a sign for Ashkirk and this took us up another steep hilly single track road for quite a long time. It was nice and quiet though and the views of the hills and valleys got better and better the higher we went. Since it was Easter, we stopped halfway up the hill and rolled our eggs. Dad had painted his egg like Derek McInnes the Aberdeen FC manager but after I’d smashed it down the hill, it no longer looked like him! McInnes tasted fine though… At the top of the hill we crossed a cattle grid and then it was simply a case of zooming back down the other side to the village of Ashkirk. Just before the village, Dad spotted a very unusual road sign warning car drivers not to go down a certain road because their “sat-nav is wrong and the road isn’t suitable for cars” (see photo below). It was probably OK for bikes but we stuck to the proper road this time. Askirk seemed nice enough but beware that there’s a lot of misleading sign posts there pointing to various places and most of them seemed to be pointing in completely the wrong direction. We ignored the sign pointing left to the golf course and Roberton and instead headed right – in the direction of the golf course and Roberton…

After a few miles of easy cycling along a nice quiet road, we came to yet another uphill section as the narrow road took us up very high and into some really remote and hilly countryside. It was perfect for cycling as it was quite a gradual climb really and the views were amazing. We even saw some baby Highland cows in a field. After a short while cycling right along the top of the hills, the road then went downhill for a long time (maybe 4 or 5 miles) and we sped far too fast until we reached the junction with the B711 where we turned left and cycled along a much flatter and very smooth road for a couple of miles, following a river. Just before reaching the A7 again we turned left onto a minor road which took us to the park on the outskirts of Hawick so we cycled through the park and then over a bridge into the town centre where we stopped at Greggs for an early lunch (cheese and onion pasty for me, 2 sausage rolls for Dad).

We followed the Border Loop cycle route signs out of Hawick on a minor road and were soon in the countryside once more. This area is extremely quiet and scenic and the roads are nicely surfaced with lots of ups and downs so it is ideal for cycling. After a while we came to a crossroads with lots of signs on it so we chose Minto. This turned out to be a rather steep choice but we found that Minto is very pleasant place with a golf course and a nice church. We stopped there for a snack of oatcakes and Dad spotted 2 pheasants that were either fighting or mating – we didn’t stay long enough to find out… After Minto it was uphill again and we cycled around the side a rather distinctive dome-shaped hill (called Minto Hill funnily enough). Then it was basically another 6 miles of peaceful cycling on quiet roads with lots of ups and downs (mainly downs this time) heading closer and closer to the impressive Eildon Hills as we eventually reached Newtown St Boswells.

We quickly headed out of town, across the main A68 road and along a quiet road for less than a mile before crossing over a pedestrian bridge over the River Tweed to Dryburgh. There’s an abbey near there but we didn’t see it today and instead followed the road which would takes us the long was back to Melrose via the Leaderfoot viaduct. Before reaching the viaduct though, we had yet another hill to climb but it was well worth it as the views from the top were amazing. There’s a view point at the top called Scott’s View because it was Sir Walter Scott’s favourite view in the Borders. He was right enough as the view of the Eildon Hills and valley below was reasonably remarkable I thought. Then it was a short and fast downhill section to Leaderfoot and the amazing viaduct which came into view just as we cycled underneath the main A68 road. Just there, we turned left onto a pedestrian bridge which carried us over the Tweed once more and provided us with great views of the viaduct. After crossing the bridge we turned right onto a road that is not open to cars (there’s a locked gate at the end of it) but it’s good for bikes and it took us right under the viaduct and down to the village of Newstead. It was then just a mile along the B6394 to Melrose (where we stopped as usual for an ice cream) before heading back to the train station in Tweedbank following Cycle Route no.1 via Darnick. Oh, just outside Melrose on the B6394, Dad spotted a very large banner advertising a fencing company who claim to be the “Erection Specialists” (see picture below). He was basically in tears with laughter but I didn’t have a clue why. Dad says I will understand the joke in a few years time…

Today was really fun day out with lots of hills to climb, very little in the way of traffic and some of the best views we’ve had whilst out cycling. We love going to the Borders but it’s a big place and there’s still lots more of it to explore so stay tuned for Grand Tour vol.4 sometime soon… 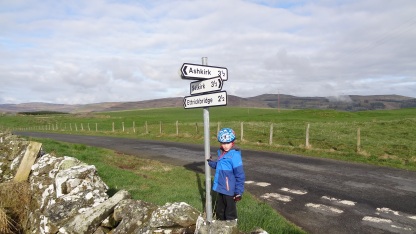 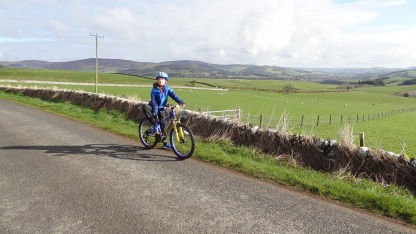 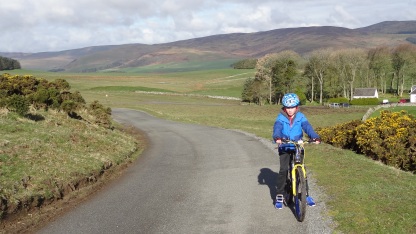 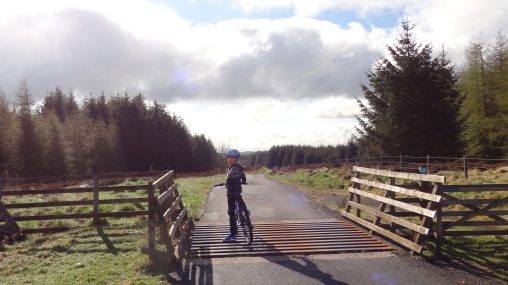 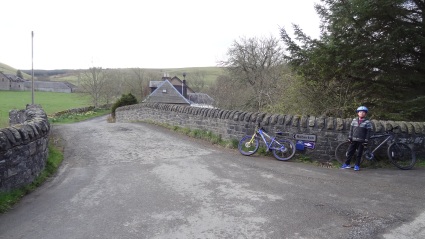 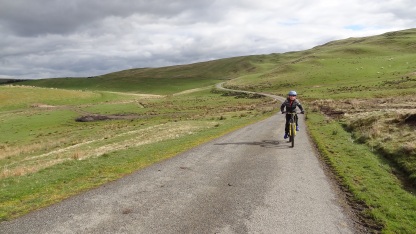 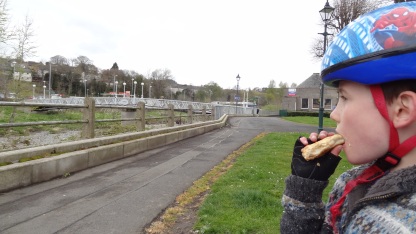 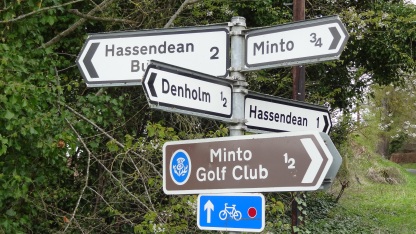 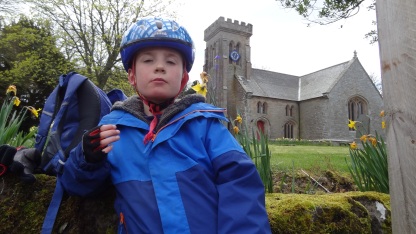 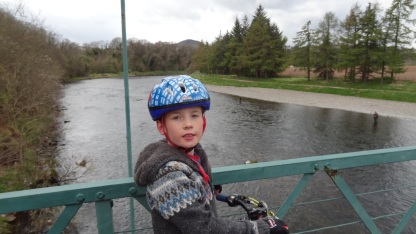 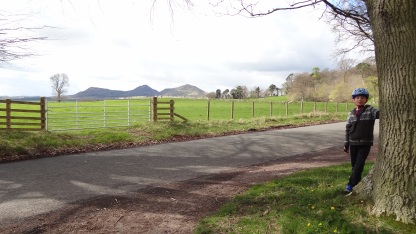 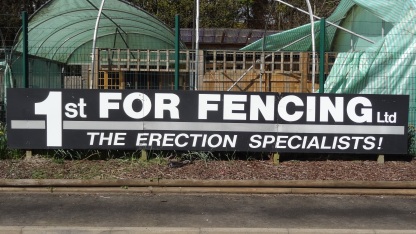 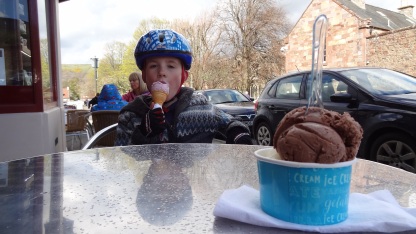